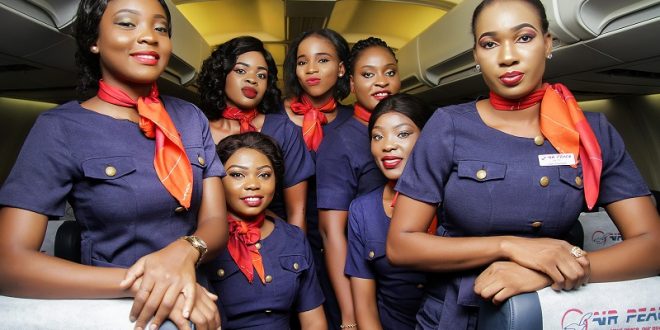 AIR PEACE female flight and cabin crew members will on Thursday step into an arena that has been dominated by their male counterparts for almost four years running, taking full charge of the carrier’s four-sector flights on the Lagos-Abuja, Abuja-Owerri, Owerri-Abuja and Abuja-Lagos routes.
The development is coming days after Air Peace gave command to Sinmisola Ajibola, who made history as the airline’s first female captain and was decorated with her new rank by the Chairman/Chief Executive Officer, Mr. Allen Onyema on Monday, June 25.
A statement issued by Air Peace Corporate Communications Manager, Mr. Chris Iwarah said the flight was planned in honour of the carrier’s first female captain, Sinmisola Ajibola.

“Captain Sinmisola’s achievement is a testament to Air Peace’s avowed commitment to gender equality and promotion of Nigerian women in aviation as possessing the requisite skills to distinguish themselves anywhere across the globe in their chosen career,” the airline said.
Air Peace explained that although women occupy most of its top positions, “Sinmisola’s elevation is a great milestone in our effort to grow capacity for women in the cockpit.”
Sinmisola, who will be in command of the four-leg flight, will be assisted in the cockpit by Senior First Officer Quincy Owen.
The all-female crew flight scheduled to take off from the General Aviation Terminal (GAT) of the Murtala Muhammed Airport, Lagos at 1310 hours is estimated to arrive to a water salute at the Nnamdi Azikiwe International Airport, Abuja at 1420 hours. The flight will depart the Nnamdi Azikiwe International Airport at 1450 and arrive at the Sam Mbakwe International Cargo Airport, Owerri to another round of water salute at 1550 hours. After a brief event at the Owerri Airport, the flight will leave at 1620 hours for Abuja and arrive at the Nnamdi Azikiwe International Airport at 1720 hours. The flight will finally depart the Abuja airport at 1750 hours and touch down at the Murtala Muhammed Airport at 1900 hours.

Nigerianflightdeck is an online news and magazine platform reporting business stories with a bias for aviation and travel. It is borne out of the intention to inform, educate as well as alter perceptions with balanced reportage.
Previous NUATE presidential aspirant prepares for showdown with govt over proposed concession
Next Elumelu’s investment in Nigerian entrepreneurs hits N4.4b with N500million pledge to Delta State