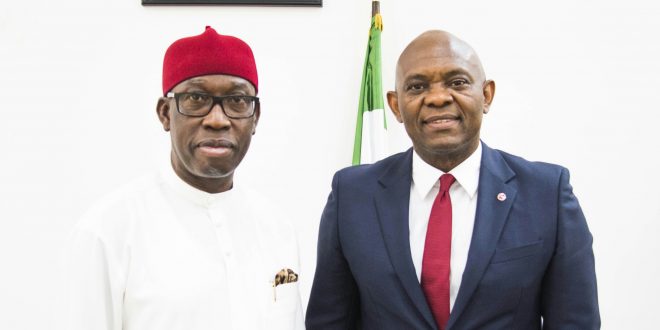 Founder of the Tony Elumelu Foundation(TEF) and Chairman of UBA Plc, Mr. Tony Elumelu, during the presentation of the young entrepreneurs to the Governor at the State House in Asaba, Delta State on Thursday

THE Tony Elumelu Foundation (TEF) Founder and Chairman of United Bank for Africa (UBA), Tony O. Elumelu, CON has pledged N500 million to create an entrepreneurship programme exclusive to indigenes of the state.

Elumelu made this commitment during a courtesy visit to the Governor of his native Delta State, after presenting 50 beneficiaries of the TEF Entrepreneurship Programme to Governor Ifeanyi Okowa.

“Your Excellency, on behalf of the Heirs Holdings Group, we will work with your office to put in place a new programme to support Delta State youth and I commit N500m to this purpose,” said Elumelu. “Indeed, hearing about your commitment to our youth and the impressive work you have done in the state, I am proud to call you my Governor and it makes me even more proud of my state.”

Governor Okowa in his speech, commended Mr. Elumelu for the work of his foundation, highlighting that TEF’s recent collaboration with French President Emmanuel Macron demonstrates the level of global recognition and stature that the Foundation has received:

“You didn’t restrict the impact of your Foundation to Delta, or even to Nigeria, you have empowered 4000 across Africa. What you are doing my brother is giving hope to others, who in turn will help to change the narrative of our country and continent and influence the people around them. You are changing the narrative of giving – not just handouts, but giving skills and mentoring. In the next ten years, the impact of the Tony Elumelu Foundation will be truly transformational – the multiplier effect will be huge. The whole country should support and think positively in this same direction.”

He continued: “I would also like to use this opportunity to encourage our brothers, sons, daughters and fathers that it would be heartwarming if we can make this kind of positive impact we’re seeing with the Tony Elumelu Foundation. It will help us reduce restiveness, and create employment so that as a country we have young people who are not just seekers of employment but creators of employment.”

A highlight of the event was the sharing of success stories between beneficiaries of the Foundation and the beneficiaries of the different wealth and entrepreneur development programmes of the Governor Okowa administration. One prominent Delta State indigene and alumni of the TEF Programme, Zion Oshiobugie, confided that:

“I was once someone’s houseboy, thinking of committing suicide when I lost my job. When I started my business, I was always asked for collateral, but Mr. Elumelu only asked for me an idea with transformative potential. Today, I run a school providing quality education for those who most need it. I am living proof that with money and training from the Tony Elumelu Foundation, dreams can come true.”

Nigerianflightdeck is an online news and magazine platform reporting business stories with a bias for aviation and travel. It is borne out of the intention to inform, educate as well as alter perceptions with balanced reportage.
Previous Air Peace first all-female flight goes to Abuja, Owerri Thursday
Next FAAN gives passengers feedback mechanism, unveils PEBEC app at MMIA