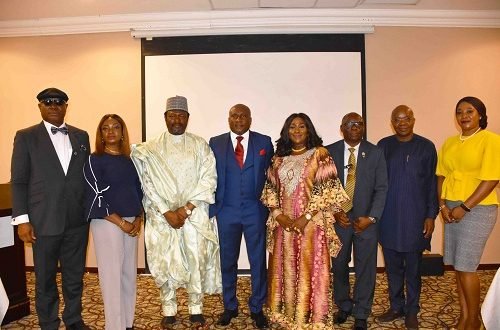 NigerianFlightDeck 22nd May 2019 Appointments and Labour Comments Off on Air Peace appoints 7 new Board members 1,080 Views

This is just as the airline has spoken on whether there are plans to join the Nigeria Stock Exchange anytime soon.

This brings to nine(9) the current membership of the Air Peace Board of Directors, Including the Chairman, Allen Onyema and the Vice Chairman, Alice Onyema.

Inaugurating the Board, Chief Executive Officer Air Peace Barrister Allen Onyema expressed satisfaction at the calibre of the airline’s board and stated that they would in turn strengthening the airline and add substance to the airlines core value of Professionalism, Efficiency, Assurance, Customer Service and Excellence (PEACE).

He also said the Board would aid in the overall goal of the airline, to bring peace to the nation, unify Nigeria as well as provide jobs for the teeming unemployed workforce the country is currently strangulated with.

The members are Mr. Mutiu Sunmonu who served as the Managing Director of The Shell Petroleum Development Company of Nigeria Limited.

He also worked in the Oil and Gas industry for over thirty six years in Nigeria, the United Kingdom and the Netherlands. Between 2008-2015, he was the most senior African leader in the Shell Group, directly responsible for leading Shell’s multi-billion dollar operations in Nigeria (4 subsidiary companies) employing over 4000 direct staff with a revenue contribution to the Nigerian Government of circa $70 billion dollars between 2009-2013. He currently serves as Chairman Julius Berger Nigeria PLC.

Chief Nnaemeka Ngige (SAN), Senior Advocate of Nigera and Principal Partner at Emeka Ngige & Co, Ngige, SAN studied Law at the University of Nigeria Nsukka (UNN), Enugu Campus (UNEC). Emeka joined the law office of G.N. Uwechue & Co , Bank Chambers, as a pupil counsel. He was in this law firm between 1986 and 1990. Thereafter he set up his own law firm-Emeka Ngige & Co .

While in private practice, as a young lawyer, Emeka found time to serve his Community, Alor in Lagos by becoming their Assistant Secretary and thereafter substantive Secretary of Alor Development Union Lagos branch.

A seasoned external relations, international development, leadership and conflict resolution professional, Eka enjoyed a long and fulfilling career in Shell where she held several leadership positions in Nigeria, The United States of America and The United Kingdom.

Engr. Adeyileka is a member of professional bodies like Nigerian Society of Engineers (NSE) Membership No. 32532 and National Association of Aircraft Pilots and Engineers (NAAPE). He is a Registered Engineer with Council for Regulation of Engineering in Nigeria (COREN) with registration no. R52385.

Mohammed Danjuma is the President Arewa Transformation & Empowerment Initiative, Danjuma is a social development expert and philanthropist. A patriotic and detribalized Nigerian who hails from Zuru in Kebbi State, His leadership journey started many years ago as a boy RSM from the popular Nigerian Military School Zaria.

Since then he has used his position at different levels in life to touch the lives of many Nigerians in both public and private service. In his public-sector surjourn, he has served as a Special Assistant to the National Security Adviser (NSA) and also as a Senior Special Adviser to the Minister of Power. He was a member of the pioneer team that developed the Buhari Plan (The North-East Recovery Blueprint) which evolved into the Presidential Committee on the North-East Initiative (PCNI) .

Mrs Erijo Eghagha (Chief administration Officer of Air Peace and Executive Board Member) is also responsible for the Administration of over one thousand, five hundred employees. In a career that has spanned Aviation, Communications and banking industry for over thirteen years, she has an outstanding track-record of success. Her core experience is in Administration, Accounts, Financial Management, branding, Business Development, Business Strategy, Communication and Customer Relations.

Mrs Oluwatoyin Olajide who is the Chief Operating Officer of Air Peace and doubles as an Executive Board Member). She holds a First Class Honours degree in Chemical Engineering from the University of Lagos with over 13 years’ experience in Aviation with core experience in Airline Quality and Safety Management Systems, Flight dispatch, Six Sigma, Risk management, Human Factors, Aircraft maintenance inspection and allied fields.

Originally hired as the Safety Manager, her outstanding qualities and performance saw her rise to her current position. She oversees the Administration and Operations of Air Peace Limited as its Chief Operating Officer/Managing Director.

All the members expressed joy at the opportunity to serve and improve the airline, especially at this point when it is about to take off its international operations.

Speaking to the media on what the inauguration entails and what Air Peace’s plan for the Nigeria Stock Exchange is, Air Peace Chairman, Onyema said the NSE is agood step but the airline is still building and needs time to get it right.

He said,” My interest is not to acquire money for myself, if it is time to go public you will know when the time comes but now we are still building. I want to lay a solid foundation before going public. You dont hurry into stock exchange, you get your money and by the time you get your money, all youve invested you lose interest in the business and the business will start losing… I don’t want to shortchabe the society, I just want to play a honest game, the foundation is not well laid yet, once it is properly laid we can go public but not now, its not in our immediate calculatiions.”

Nigerianflightdeck is an online news and magazine platform reporting business stories with a bias for aviation and travel. It is borne out of the intention to inform, educate as well as alter perceptions with balanced reportage.
Previous Aviation Unions cripple NCAA over new organogram, COS
Next Bristow Nigeria acquires additional six aircraft to fleet