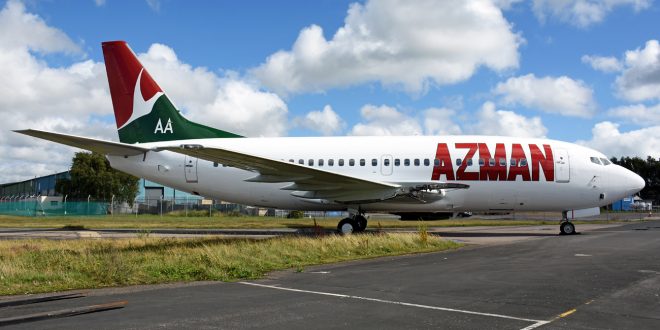 FOLLOWING the air return involving a Boeing 737-500 aircraft operated by Azman Air, with registration marks 5N-SYS, Accident Investigation Bureau, Nigeria (AIB) commenced investigation of the incident, which is as a result of fire onboard the aircraft and decalred the alert was false.

AIB in a statement said they were notified on the 7th November, 2019 of the air return involving a Boeing 737-500 aircraft operated by Azman Air, with registration marks 5N-SYS.

The aircraft, which departed Murtala Muhammed Airport, Lagos at 15:48 local time was enroute Abuja with 90 persons and 5 crew members onboard.

Information gathered from ATC indicated that the crew reported fire onboard at 15:55 local time and thereafter declared a ‘May Day’.

The crew requested for an air return to Lagos for landing and emergency services (ARFFS) standby.

The crew later downgraded the emergency to Urgency –PANPAN and the aircraft landed safely at 15: 57 local time. All the occupants disembarked normally and safely with no injury.

The AIB team of safety investigators dispatched for assessment / investigation of the incident discovered that the fire warning alert was false.

The Bureau can authoritatively confirm that the Nigerian Civil Aviation Authority (NCAA) has declared the aircraft to ‘be in Airworthy condition to return to service’.  The aircraft has therefore been returned to service accordingly.

Nigerianflightdeck is an online news and magazine platform reporting business stories with a bias for aviation and travel. It is borne out of the intention to inform, educate as well as alter perceptions with balanced reportage.
Previous Air Peace takes delivery of B737-800 NG aircraft to strengthen operations
Next Pictures of events that made headlines this week