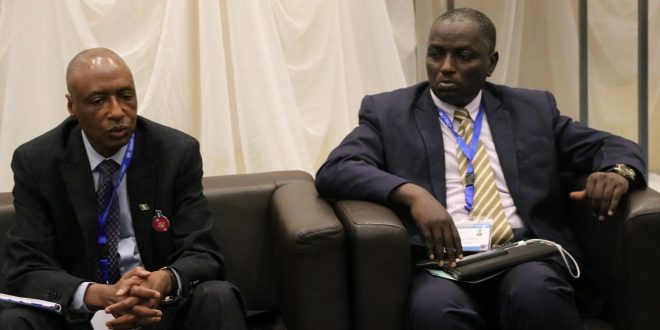 OF late there has been a flurry of complaints from many quarters on the number of unemployed pilots within Nigeria, as at the last count these young pilots were numbering over 300 which has caused worry in the industry.

Many people have raised a lot of eyebrow as to why the Cockpits of an average Nigerian airline is filled with expatriates and have criticized the government for not doing much to check this trend.

However, the Rector, Nigeria College of Aviation Technology (NCAT ), Captain Abdulsalami Mohammed looks at this problem from a different angle, proffering some solutions on how to get these unemployed pilots gainfully employed.

Speaking to newsmen recently, just after the college was conferred the Regional Training College of Excellence (RTCE), Captain Mohammed first stated that when these young pilots graduate they need to continue flying to garner enough experience to enable them become employable by commercial airlines.

According to the NCAT Rector, these young pilots should not be in a hurry to fly the big and flamboyant commercial jets as they can start from light or medium aircraft to garner experience.

He however stated that training some of these pilots is a huge burden on these airlines, especially as many of them end up leaving for greener pastures.

“Unemployed pilots , this is a subject that is dear to me because everyday I get a call from someone who wants his son employed or I get a question that ‘ why would I bother to come out and train as a pilot when there are no jobs. As you know we have about 300 unemployed young pilots in the market and the airlines are reluctant to employ and train them because they claim that when you train some of them they run away. “

On how to get young pilots employed, captain Mohammed said one of the major way was to improve the nation’s general aviation so as to get the young pilots flying and gaining flight time and experience.

“I keep saying that, our young pilots need to get involved in general aviation. The practice world wide is that when you graduate from a flying school such as Zaria, with about 250/300 flight time on a light aircraft you go into general aviation, some of them stay on with the flying school to gain experience and build flight time, that’s how I started. “

“Shortly a few years after Virgin Nigeria, Arik came on board and they also employed these other pilots that didn’t go into Virgin Nigeria. More airlines started up and that was when the industry started recovering and then Arik developed rapidly, they were having up to 30 aircraft at one time and so they were able to mop up all the experienced pilots that had been in the industry then airlines had to look elsewhere and that was when they started employing these young inexperienced pilots and begin training them.”

The NCAT Rector however warned on the cost of training a fresher from the college on a jet explaining that pilots are trained through trial by fire and that it would be a humongous mistake to train a young pilot with an aircraft having hundreds of passengers.

“That training comes at a cost, training an inexperienced pilot when you are carrying 150 passengers is not ideal, normally in flight training when you train a pilot, he learns by trial and error by taking him into the air and showing him how things are done and the. You give the controls back to him and say ‘now it’s your turn show me what you can do’ and he will try to do it, make mistakes. You allow him to make some mistakes as long as the safety of the aircraft is not compromised so that he can learn from his mistakes, that is how we train pilots. “

“But when you now have 100 sometimes 300 passengers sitting in the back and you have someone in training, you don’t want him to make mistakes, otherwise those passengers may never fly with that airline again. So it is not the ideal training environment. So you find that the training takes too long and it is expensive and at the end of the day the airline says ‘this man is not trainable’ and they stop training that is why a lot of airlines are reluctant to start bringing people.”

“That is my opinion and I have said this before and the social media was awash that the rector said such things about pilots but I believe the key to this problem is improving our general aviation, if you count the number of private jets we have in Nigeria, if they can employ on each private jet, at least one of these pilots at any giving time that will create jobs.”

“On the average for normal operations for a light user they have four pilots or three two working and one on leave multiply that by the number of pilots that is a lot.”

He further encouraged the young unemployed pilots to start with general aviation as it is the perfect training ground for them.

“These young men are cheap to employ and it is easier for them to handle such aircraft, in fact it is the best training ground for them, it’s more difficult to work private aircraft than it is to work on a commercial aircraft because when working on a private aircraft you are a one man show, you are the pilot , you are the dispatcher you fuel the aircraft yourself, you are the accountant whereas in an airline you have people who do all these for you so it’s a good training ground for them and so my opinion is this sector should open up to these young men and absorb them and when they gain the experience they can join the airlines. ”

Captain Mohammed also said that the planned establishment of a national carrier would also help creat employment due to migration of the experienced pilots creating openings in their present positions for young pilots.

Nigerianflightdeck is an online news and magazine platform reporting business stories with a bias for aviation and travel. It is borne out of the intention to inform, educate as well as alter perceptions with balanced reportage.
Previous Med-view offers Yuletide discounts on Lagos-London route
Next Professionals harp on increased information sharing at MamaJ aviation career conference