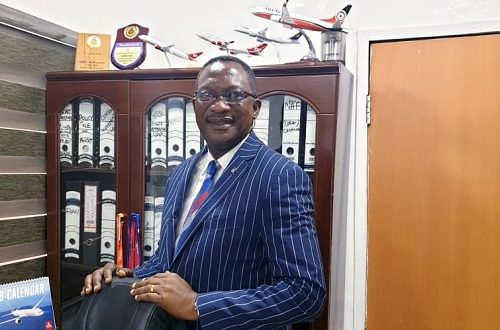 West Africa has the potential to become the new frontier for air travel and sustain fast rising carriers within it, if Heads of States and Ministers in charge of Air Transport in the sub-region legislate that priority must be given to airlines operating the sub region for seamless operation.

An Air Transport Specialist and International Airport Professional (IAP), Mr. Richard Aisuebeogun who made this known in an exclusive interview with NigerianFLIGHTDECK also said now is the time for carriers in the sub region whether flag, national or privately owned airlines urgently needed to code share as that will make them stronger and create capacity.

This is just as he said Nigerian airlines need to make empirical and analytical presentation to the Economic Community of West African States (ECOWAS)Secretariat on the viability of air transport in the West Africa market and as the greatest of transportation mode that can catalyze economic and regional integration and development.Read More:Travel expert slams lingual-aeropolitics in W/Africa; calls for travel card use in sub-region

Also he emphasize on the need for the West African heads of states to support, by legislation air transport within the 16 countries in the west African sub-region.

Aiseubeogun explained that he was canvassing code shares concept and not mergers because of the core value differences as language and ethnic barriers which, according to him could create friction in such agreements stressing that with properly drafted code share agreements, all parties will operate at an equal and mutually respected benefit

” I find a code share amongst West African airlines themselves very appropriate. So that as an airline flying from Abuja or Lagos, I may choose not to fly all the way to Banjul for airline economics reasons. On the other hand, for instance an airline can take passengers from Lagos to Accra and in transit, passengers can change flight or airlines from Accra to Freetown or fly Nigerian passengers to Freetown and transfer passengers from Freetown on another airline to The Gambia,Banjul, or Cabo Verde. More like a ‘point beyond’ integration strategy

“It’s very simple, code sharing is very important, mergers may not work because of multiple languages barriers and ethnic barriers or what i come to call ethno-political barriers but code shares and alliances would. This means instead of me operating all the way to Banjul burning more fuel, consuming more fuel, I could operate up to Freetown, transfer the passenger into another airline which now takes my passengers to final destination from there in a very seamless manner.”

Speaking further on leaving the sub-region’s flanks open and how others have benefited, Aiseubeogun said:

“I want to say at this point the West African region as a whole is a large market for Africa and that is why an airline like Ethiopia set up a subsidiary called, ASKY to operate the region on a 5th Freedom Right. So you can see ASKY coming into Lagos, going to Accra, Lome which is actually their hub of operation and that is what we are losing, however the truth is this, i am not a against the operation of ASKY because that is what the Single African Air Transport Market (SAATM) is all about. However, west African countries should grant the same leverages rights and privileges to other airlines from the region so as to have and to allow for free enterprise and equal competitions in operations.

“The same regulations and rules that apply to ASKY should also be applied to other carriers in the region. Like they say a prophet is not accepted in his household so airlines in West Africa are not seen to be strong players so it’s easier to attract and accept airlines from another region especially financially buoyant and dominant players, but the truth is that you’ve got to encourage your own players as well and you can’t be wrong supporting your own

“Therefore until the heads of state of West Africa Community, the Ministers of air transport in West Africa legislate that priority must be given to West African airlines on the West African Sub region, in terms of all their economics and operations, only then would the airlines grow and dominate even beyond the sub region, and there is nothing that says you cannot have multiple domination of airlines in the region.

“Air Ivoire is operating A319, Air Senegal is operating A320s and 330s they may not be coming to Nigeria but they are operating on the West Coast and intercontinental especially to EU and North America. Now can you imagine what a synergy or code share between Air Peace and Air Senegal; Air Peace and Air Ivoire, it’s going to certainly be an economic boom for the entire West African market.

“Air Peace may not have to get all the way to Dakar, they can say okay,I would do the anglophone countries, you do the francophone countries and we meet at a point and transfer passengers and share revenue, that will also enhance longevity of the operations of the airlines because your due time or calendar maintenance will be extended, you’d have a longer time period, your engine cycles time will be extended as well, because you are no longer doing multiple landings, so you now have a longer reserve.

“Unfortunately you can’t say because you want to save engine cycle you do Lagos- Banjul direct, you won’t have what I called “True Yield Value” of the market, so in summary you’d have to do multiple stops on the West Coast,” to have higher revenue yield per seat per mile. he said.

By and large the Nigerian Airlines need to be praised for foraging and sustaining the west African market over the last three decades. They need to be further encourage with strong incentives to keep the air transport component of the transportation mode active as a strong toll for economic and regional development and growth in the sub region

Nigerianflightdeck is an online news and magazine platform reporting business stories with a bias for aviation and travel. It is borne out of the intention to inform, educate as well as alter perceptions with balanced reportage.
Previous Nigerian Immigration holds valedictory session as CG Babandede retires from Service
Next 35 years after, ground handlers commend Sirika, NCAA for effecting approval of new charges