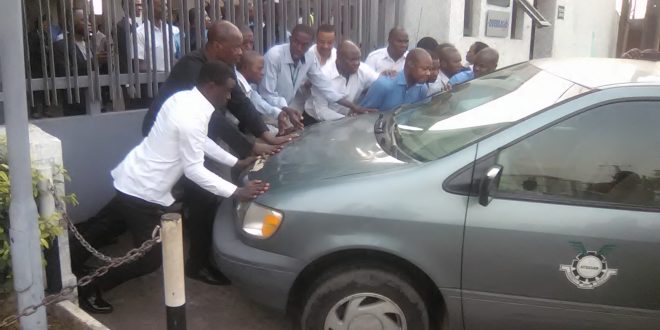 NEGOTIATIONS broke down  and fracas ensued this morning at the headquarters of Landover Company, when the Chief Executive, Captain Edward Boyo and some members of his staff went headlong with members of the Air Transport Senior Staff Services Association of Nigeria (ATSSSAN) who were picketing the company over labour grievances.

The chief executive and some of his staff were on a warpath as they tried to move the vehicle which the unions blocked the gate of the office with.

The police was on ground to quell the matter before it escalated further as unions and the management were both unyielding to each other.

Nigerianflightdeck learnt that the reason for the picketing is connected to remittance of pensions, unremitted funds to the corporative accounts, alleged inhuman treatment of workers coupled with shortchanging  from the management as well as arbitrariness and high-handedness.

National President of ATSSSAN, Comrade Ahmadu Ilitrus who spoke to reporters on the reason for the picketing also said that it was management’s unyielding and combative nature that has caused the issues which has been negotiated over a months to degenerate.

He said,” The Landover group, they have Helicopter Landing Officers (HLO) and they are affiliated to our organization and we are here this morning because of an avoidable situation that was mismanaged to the point that we had to do what we did today.”

“ATSSSAN has been in discussion with land over management  over review of conditions of service, this document ought to have been signed and ready as at march of last year but the management due to its indiscretion  dragged the process up till now, well we have been talking and talking and there are some areas we have not been able to agree and those are basic areas fundamentally covered by law.”

“For instance, Landover says if they have disciplinary committees to try our members, no union member will be part of it;  I think its unheard of  as the law requires that the union which the officer belongs to should  be represented even in an observer capacity.”

“ The last time we met here we adjourned the meeting and we were shocked when we came in the morning and they told us the meeting could not hold as Landover and that Landover had taken the matter to the Federal Ministry of Labour. Now we were at  labour and when they saw that all those issues they were contesting  were not issues, for instance you do not want to define the meaning of corruption in your laws, I think all these things  are little things we could have done away with.

“They agreed to sign a memorandum. The following day they came Landover Management said they were not signing anything and walked out of the meeting and that is the reason we are here today.’

“In their conditions of service, if you serve 5- 15 years with Landover, the generally acceptable formula for calculation of gratuity is basic, transportation and housing times number of months times the year you have served. It is the last year you are exiting from service that would be used to calculate the gratuity backwards but they  are saying that for each year they will calculate it separately and at the end of the  day someone who served 15 years is going home with N340,000. It’s unfortunate and unacceptable to us.”

“The only way out is for management to come down from their high horse and speak to us.”

Earlier the National Deputy Secretary, Frances Akinjole confirmed that management had been running afoul of the Collective Bargaining Agreement (CBA).

He also said that in the event of a force majeure especially during off shore operations the Landover company refuse to pay those stranded stating that they were not at work which they find unjustified since those workers were on their way but stranded due to natural causes.

Nigerianflightdeck is an online news and magazine platform reporting business stories with a bias for aviation and travel. It is borne out of the intention to inform, educate as well as alter perceptions with balanced reportage.
Previous Dana Air commences flights to Kaduna March 8, promises on-time departures
Next SAA encourages travel partners to explore multiple revenue generation streams