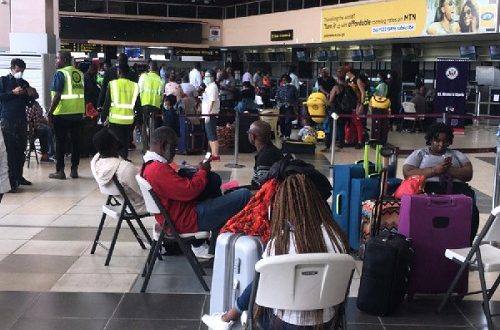 NigerianFlightDeck 3rd April 2020 Aviation News Comments Off on US evacuation flight turned around as nationals forced to remain in Nigeria 1,994 Views

NO fewer than 218 nationals of the United States set for evacuation from Nigeria had their hopes of leaving dashed  after their flight was cancelled and  forced to return back while enroute due to crew illegality issues.

The evacuation flight, a Boeing 767-200 with Registration N207AX/1005 operated by Omni Air International was supposed to arrive the country 0515UTC around 0615 local time but the Captain Crabb Michael Ray was asked to turn around

After going through check-in and  waiting long hours at the Murtala Mohammed International Airport (MMIA), Lagos the united States nationals who were due to travel today were stamped back after being stamped out for travel.

A letter sighted by Nigerianflightdeck dated 3rd April, 2020 LFS 300320-033/13 which copied the United States Embassy Abuja read in part,” We hereby write to inform you of the cancellation of the flight with details below….”

The US  evacuees  wore sad faces when they were informed by the authorities that the evacuation flight may not land due to certain reasons not known to them.  The passengers were seen collecting their baggage from the arrival baggage belts with the plan to go back home.

Nigerianflightdeck is an online news and magazine platform reporting business stories with a bias for aviation and travel. It is borne out of the intention to inform, educate as well as alter perceptions with balanced reportage.
Previous COVID-19: EU evacuates 637 nationals from Nigeria via MMIA, outbreak’s single largest evacuation
Next  COVID-19: Air Peace flies in Nigeria’s medical supplies against coronavirus from Turkey