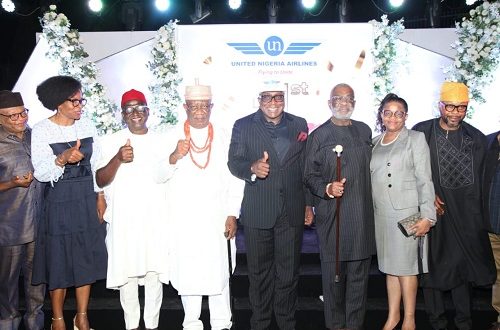 CHAIRMAN, United Nigeria Airlines, Dr. Obiora Okonkwo, has said the airline is is near completing a deal with Air Peace that would revolutionize the aviation sector and usher in a new era of collaboration for better travel experience stressing that deal will be unveiled in the ‘next few days’.

Speaking during a Gala and Award Night held at The Dome in Abuja to mark the first anniversary celebration of United Nigeria Airlines, Dr. Okonkwo said the aviation industry in Nigeria was long overdue for such collaboration.

According to him, such partnerships enhance business and improve capacity of airlines to overcome certain issues that lead to flight delays.

“In the next few days, we are going to sign an agreement with Air Peace of collaborations that will improve travel experiences in the country and also help address certain problems that arise in the course of flight operations”, he said.

Dr. Okonkwo also drew attention to the habit of passengers physically assaulting airline staff and also, destroying airline and airport property as a way of expressing anger over flight delays or cancellations.

Reminding that the resort to such actions are uncivil, Dr. Okonkwo said airline staff and property are not in any way connected to issues that lead to flight delays and, or, cancellation.

“Those airline officials that are beaten up and the property that are destroyed are not in any way connected to factors that cause flight delays. Those airline officials that are assaulted are husbands, mothers, sisters, brother etc., of people. They are working for their pay and do not have any hand in reasons flights are delayed. I am happy that AON (Airline Operators of Nigeria) has condemned this development.

“People ought to understand that no airline operator takes delight in keeping his aircraft on ground. Operators make money when their aircraft is flying. Aircraft on ground is loss to operators. So, when delays or cancellations happen, they happen for the safety of the traveler.

‘Flight delays and cancelations happen in the aviation sector all over the world. When they happen, they are mostly for the safety of the passenger. So, I plead with our customers to show better understanding in this regard”, he said.

Commending the 16 officials of the company who won different awards for their outstanding performance during the year, Der. Okonkwo said that the striking development about the staff was that realization that almost al the awardees had no prior experience in the aviation sector but have worked steadily to become the best.

“It is interesting to note that all the awardees were people who did not have prior experience in the aviation sector. we employed them as greenhorns and have trained them to become the best. They were nominated by their colleagues for the awards and we make bold to say that this is a testimonial of our focus on human capital development.

‘Every job opportunity at United Nigeria Airlines, is also an opportunity to develop veritable human capital for the industry and we are glad that we have some of the best in the industry who have also applied their expertise to train and nurture these greenhorns”, Dr. Okonkwo stated.

Nigerianflightdeck is an online news and magazine platform reporting business stories with a bias for aviation and travel. It is borne out of the intention to inform, educate as well as alter perceptions with balanced reportage.
Previous Aviation industry commiserates with families of crash victims, counts 2036 deaths since1969
Next AIB-N needs police partnership to end looting of crash victims- Olateru