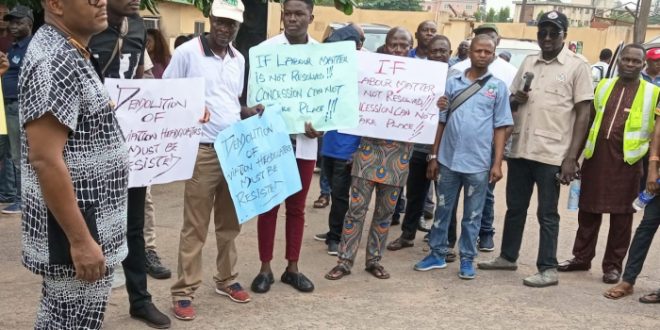 Aviation unions today gathered around Freedom Square to demonstrate plans spearheaded by the Minister of Aviation Hadi Sirika at the dying stage of the Buhari administration to implement the aviation roadmap with plans to demolish regional headquarters of aviation agencies  to make way for an Aerotropolis.

Unions came out carrying placards like Demolition of Aviation Headquarters must be resisted,if labour  matters are not resolved no concession will take place among other placards to pass hoke their points

The Minister in a recent interactive session announced demolition of the Federal Airports Authority of Nigeria (FAAN) and the Nigerian Airspace Management Agency (NAMA) at the Murtala Muhammed Airport (MMA) in Lagos to make way for the Aerotropolis project that would house  hotels, cinemas, spars and other facilities on the land presently occupied by the two major agencies.

This planned demolition is coming eight (8) months after the Ministry of Aviation ordered the demolition of the headquarters of the Accident Investigation Bureau – Nigeria (AIB-N) N5bn facility at MMIA to make way for the apron expansion at the new MMIA terminal to accommodate wide bodied aircraft, a project that is still at the moment, stalled.

The unions who held a demonstration against the planned demolition argued that the haste to achieve things by the ministry after dilly-dallying for seven years may lead to an aviation crisis that can not be corrected in the near or distant future.

The unions argued: “About seven years ago at the sunrise of the Muhammadu Buhari regime, the Minister of Aviation, senator Hadi Sirika, came up with what he themed Aviation Road Map. This consisted of six flagship projects conceived as signposts of his stewardship.

” The projects include establishment of a national carrier, Maintenance, Repair & Overhaul, aircraft leasing company, agro-allied airports, aerotropolis, and concessioning of the four major international airports in Lagos, Abuja, Kano and Port Harcourt.  For inexplicable reasons none of the above projects has been delivered up till now.

” It is therefore not surprising that the Hon. Minister is presently in a frenzy in an effort to deliver these projects, being that this administration is at its twilight.

“This rush to deliver at all cost has expectedly occasioned suspicion and a plethora of missteps which if not corrected will spell doom for the aviation industry in Nigeria, and which may proof exceedingly costly to amend in future.”

According to the unions, the proposed projects are vital for the good health of the industry and that the current administration does not own the credit for conceptualizing these projects, but the relevance of the projects to the improvement of the Nigerian aviation industry cannot be underplayed.

They expressed fears,” We have cause to seriously worry about the manner of delivery( of the Aerotropolis). More crucially, we are concerned about whether what is being delivered is actually what Nigerians crave. That is the crux of the matter.

“Our hearts are now greatly troubled to be witnesses to the ongoing bastardization of the lofty objectives of the Aviation Road Map.

“Ordinarily, the attainment of the flagship projects ought to act as consummation of the benefits of the substantial investments made by the Government in facilities upgrade in the agencies.

“But, activities around the implementation of the road map tend to suggest that a ploy is afoot to deny Nigeria of the benefits of its labour and natural endowments, or to divert such to private ends.

” Nothing evidenced this more than the fact that key decisions and actions around the projects are taken outside the statutory organs of the ICRC; the Project Delivery Team in which our unions are represented for example.

“Such important questionable actions include appointment of Transaction Advisers and approval of Business Cases for all the projects.

For the purpose of today’s meeting, and since this is a meeting of FAAN workers and pensioners, our focus shall be on Airports Concessioning.

Of all the projects under the Aviation Road Map, our Unions have been most vocal over airports concessioning. This should not be surprising considering the potential negative impact on the large staff and pensioner strengths of the Federal Airports Authority of Nigeria, the agency undertaking the concession.”

Nigerianflightdeck is an online news and magazine platform reporting business stories with a bias for aviation and travel. It is borne out of the intention to inform, educate as well as alter perceptions with balanced reportage.
Previous Dana Air marks 14th year in operation, gives out free tickets onboard flights
Next Finally, MMA Runway 18L/36R reopens with full Airfield Lighting