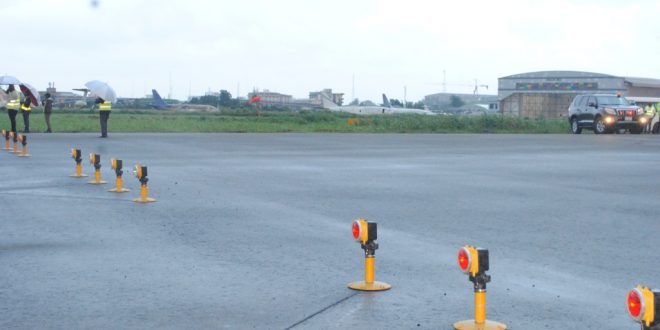 Ongoing installation of approach lights, Runway Lights (Threshold and Centre, edge light and others so that runway 18L/36R returns to full 24/7 operations.

The domestic runway, Runway 18L/36R of the Murtala Muhammed Airport ( MMA) has resumed for operations from today November 11, 2022 according to a Notice to Airmen ( NOTAM) A0441/22 NOTAMC A0439/22 Q emanating from the Aeronautical Information Services ( AIS) of the Nigerian Airspace Management Agency and sighted by NigerianFLIGHTDECK.

The Runway lighting was complete, according to the Federal Airports Authority of Nigeria (FAAN) sometime last week and according to a well placed source, the re opening was delayed to ensure full reliability tests are conducted and passed.

The 2.7 kilometres (2,700m) long runway 18L/36R was shut down by FAAN on July 7, 2022 for 90 days to install approach lights, Runway Lights (Threshold and Centre, edge light and others so that it can return to full 24/7 operations and ease the burden of operators. FAAN meets airlines, plans Runway 18L/36R closure for AFL installation from July 7

Although the runway exceeded the 90 day period allotted for the completion of the job, FAAN managing director, Captain Rabiu Hamisu Yadudu had during the cause of the installation said he would rather delay and do a thorough job instead of the alternative.

The runway rehabilitated and resurfaced in 2008 was commissioned without airfield lighting ( AFL) restricting airline operators to daylight operations only and causing untold hardships with regards taxiing from the international and burning over 10 minutes worth of Jet A1 hugely impacting on their costs. FAAN declares Runway 18L/36R 90% done;  intends to carry out thorough job

With the runways return to service, the unnecessary 10-20 minutes fuel burn each time they land on the international runway taxiing to the domestic, cumulating to billions will end and airlines can equally schedule flights to the airport to maximize aircraft usage.

Already stakeholders have expressed their delight at this new development and eagerly await the benefits of the runway once it is reopened. Runway 18L/36R: Industry plays up benefits of 24/7 ops as FAAN plans delivery on schedule

Nigerianflightdeck is an online news and magazine platform reporting business stories with a bias for aviation and travel. It is borne out of the intention to inform, educate as well as alter perceptions with balanced reportage.
Previous Unions kick against rushed aviation roadmap implementation, demolition of agencies’ RHQs
Next Gender Inclusiveness: WMU President commends NIMASA