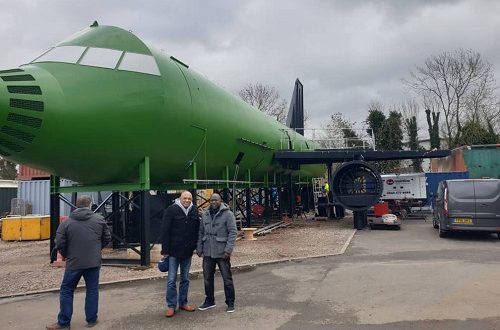 NIGERIA is set to take delivery of an automatic aircraft firefighter simulator equipment as the builders, Messrs Alpine Metal Tech. Company has carried out the factory acceptance and pre-shipment inspection and test of the simulator in presence of top Nigerian functionaries including the Minister of State, Aviation, Hadi Sirika.

The simulator, the first of its kind in Africa, is a modern- multi scenario fire fighting simulator capable of delivering training for different types of operational incidents involving aircraft in the aerodrome and its vicinity.

This is in fulfillment of the Nigeria Civil Aviation Authority requirement for training of firefighters in the airports and will, overall, enhance competence in achieving the primary objective of saving lives in the event of a fire incident.

The pre-shipment test, which took place in the United Kingdom earlier today, showcased the full complements of about 28 possible fire/non fire scenarios carried out including; cabin fire simulation, cabin smoke, lavatory smoke and the likes.

Minister of State, Aviation, Senator Hadi Sirika who spoke after inspecting the equipment and the company facility with some government functionaries said the simulator was costing the nation about N5 billion and is a safety equipment that is key for airport operations.

He said,”Well the focus of the Buhari-led administration in civil aviation is safety and security, this is a component of it. We take matters of safety very seriously and His Excellency President Muhammadu Buhari once he came into office asked us Ministers to do those things that would put the nation forward. In aviation, our policy is safety first and security and this is a demonstration of it.

“Before now, we train our firefighters in Cameroon and I found myself approving several hundreds thousands in dollars for training in Cameroon and I said this is not the best. I applied and got approval to procure this firefighting simulator equipment and he graciously approved, costing the nation about N5 billion and we started it and now it is completed and it’s ready for testing, it has been tested in front of us and you have seen it, it’s in perfect working order and condition and we will install it at the Nigeria College of Aviation Technology, Zaria (NCAT).

“Now the impact on our nation is it would improve our safety fire cover, fire fighting as an important aspect of airport operations without which we cannot open our airports. The only other simulator I know in Africa is in Cameroon and it is not as up to date, not as automatic or sophisticated, not as hi-tech, not as multi-functional. This one can simulate cabin fire, smoke, cockpit fire, cargo fire, undercarriage fire so this multi-functional ”

The Minister expressed pride that once installed the country will be a hub for comprehensive fire trainings from ab initio training , recurrency training to full training and so on.

Also speaking, Managing Director of Glovesly Pro-Project Limited Representatives of Messrs Alpine Metal Tech. Company in Africa, Mr. Yasir Tijani Abdullahi who spoke at the event in the United Kingdom explained that the simulator is set to be delivered by the end of the month as everything is almost set for the installation in NCAT, Zaria.

He said,” Unlike other simulators, this is a real sized aircraft and has everything real. it is automatic and has a soft touch console. We are getting ready as it will be ready for shipping by the end of the month. This, however, a full aircraft and will have to be disassembled into separate parts for shipping and reassembled when in Nigeria.”

“We are done with the classes. Already, work is in advance stage at the Apron in Zaria, we will lay flexible pipes where the gas pipes will go through.

On the benefits to the country, Mr. Abdullahi explained that although there is a simulator in Cameroon, it is manual unlike the new equipment the country is set to acquire plus the amounts it will save Nigeria in forex and generate in training.

“The country is set to change the status quo with regards training and retraining of fire fighting personnel as it used to regularly train in Cameroon, which has contributed in no small measures to capital flight, which this acquisition will finally nip. We will not only save capital from leaving the country but will generate capital as we will not only train for Nigeria but for the whole of the region. It will be a money spinner.

On some of the redundancies of the simulator, Yasir said apart from its deadman’s switch, the system checks itself automatically and if there is a challenge, like say gas leak, it shuts itself down and lets you know,” Abdullahi explained.

Nigerianflightdeck is an online news and magazine platform reporting business stories with a bias for aviation and travel. It is borne out of the intention to inform, educate as well as alter perceptions with balanced reportage.
Previous Assaulted Nahco staff pulls through surgery as police finally apprehends alleged perpetrator
Next Unions block access to Lagos International Airport over redundancy pay with Caverton