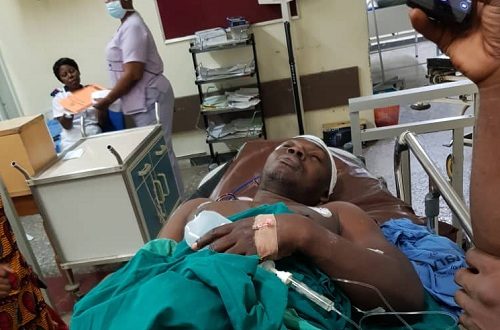 Tersuu Orhembega, the Nahco staff that was assaulted last Wednesday after his surgery last night

TERSUU Orhembega, the Nahco staff that was assaulted last Wednesday, 3rd of April, 2019 just had a successful surgery last night after the attack that put him in critical condition at the Surgical Emergency Department of Lagos State University Teaching Hospital (LASUTH).

Nigerianflightdeck, can also confirm that the man suspected to have assaulted him at the Murtala Muhammed International Airport, Lagos, one Adebayo Idowu, is now in police custody.

Nigerianflightdeck can confirm that the victim completed a successful surgery late yesterday and is resting.

His wife, Ter Gyuse who spoke to our reporter this morning confirmed the surgery stating that it started around 4:30pm and ended around 10:30pm. She was most thankful for the success and expectant that justice will be served after she heard that the perpetrator was apprehended.

Meanwhile, the 22-year-old suspect; a male office assistant, working for a clearing agent, was arrested and detained at the NAHCO Division, Airport Command of Nigeria Police Force at about 4:30pm yesterday following a lot of outcries and reports in the media.

His employer brought him to the station following an agreement he had with the police to produce the suspect by today.

Recall, our medium reported that after the incident, NAHCO security officers reported the matter to the Police. The Police came and wanted to effect arrest but were resisted by some cargo agents,

The suspect had allegedly assaulted Tersuu Orhembega who was carrying out his lawful duties within the ramp of the ground handling company located at the Hajj/Cargo Terminal by hitting him on the forehead, causing him to lose balance and hit his head on the concrete floor in the ramp.

On realizing that the victim had collapsed and was losing blood as he laid semi-motionless, the suspect was said to have escaped from the warehouse while some personnel of Nigeria Customs Services (NCS) in the shed watched helplessly, all these happened in full view of the Close Circuit Television (CCTV).

The victim is said to have suffered intra-cerebral hemorrhage, a condition which medical experts claimed may turn fatal if urgent neuro-surgical operation to remove blood stains from the victim’s brain is delayed.

Nigerianflightdeck is an online news and magazine platform reporting business stories with a bias for aviation and travel. It is borne out of the intention to inform, educate as well as alter perceptions with balanced reportage.
Previous Fire incident affects arrival section of Sam Mbakwe Airport terminal building
Next UK Company demos automatic aircraft firefighter simulator as Nigeria set to take delivery