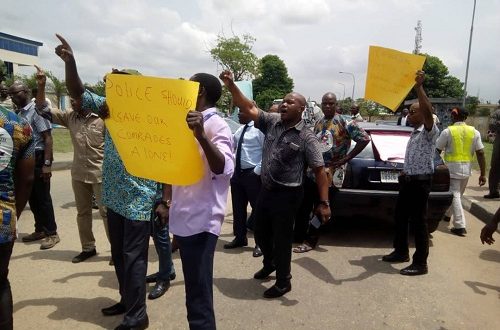 IT is utter and complete chaos around the Murtala Muhammed Airport (MMA) as unions including the National Union of Air Transport Employees( NUATE) have barricaded the access road leading to the international terminal.

Already traffic built up from the Federal Airports Authority of Nigeria ( FAAN) Access Gate and is stretching as far as the eye can see and the reason: the unions are protesting unfair treatment of their workers by Caverton Helicopters.

Trouble started when Caverton declared some of its workers redundant in February and told them they would be paid in March 29, only for the airline to go against their agreement and refuse to pay the workers while those who got something got barely one-quarter of the severance benefits.

The redundancy letter was said to have been issued to some staffs in Lagos, in operations, technical and others and all staffs in Warri and Port Harcourt operations were also affected.

The situation is made worse as management of Caverton Helicopter according to the union drafted in police men from the Rapid Response Force ( RRS) Lagos command who tried to bundle ten (10) of the protesting workers into a black maria, one of the workers refused and he was severely and brutally maltreated him giving the lad scars all over.

Chairman of the Caverton branch, Comrade Tony Ibibe who had a bandage wrapped around his head and hand said, the RRS men arrive the area with 8 trucks with guns to inquire their presence at the office and after explanation, they left promising that they would come back if they found out that they were illegally there. 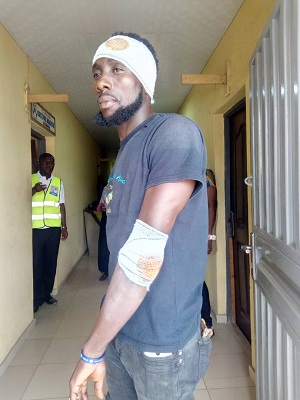 He said an hour later, they came back with 6 trucks and a Black Maria to the venue of the peaceful protest to pick them up.

According to him, he was beaten while struggling to stop them from pushing him into the black Maria van along with 9 others whom were forced into the van.

“In the process they hit me on the head and my legs, and they took my phone, keys, one leg of my shoe, face cap, money, wallet and sound system”.

According to him, they were given the letter on the 7th of February and instructed to drop all company property with them on the 29th of March as their services were no longer required and promised that the on the 31st, all their entitlements would be paid but unfortunately the terms of agreement was not followed.

“Till date, they have not paid in full, some people were not paid, some people were paid, those that were paid was half payment, they short pay them, the calculations were wrong, no breakdown, they did not follow the terms of agreement, a lot of letters have been sent to them no response, we decided to picket the company, we followed due process in the picketing all protocol was observed and the area commander was aware of the picketing”.

1st National Deputy President of NUATE, Comrade Markus Moses Ogil, who spoke said when the management decided to embark on redundancy, it was agreed with the union that immediately they were disengaged, all their entitlements would be paid but unfortunately, they went ahead and disengaged the workers with being paid.

He said they have explained to them what the labour law says regarding redundancy but the Caverton management had refused to obey the law.

“We have talked to them on why they should not go against the labour laws, our members were laid off without following due process, when we engaged them, we took a line of reconciliation, which we say this people if you are going to lay them off lets engage ourselves in what we call redundancy arrangement which was never respected and after so many notice that this was the right thing to be done, the management were indifferent”.

“The law about redundancy agreement when it is agreed upon is that it should be paid before the staffs are laid off, if you do not have the resources, do not lay the staffs off until you are ready to do that, by saying go without giving them what is due, how will they cope with the current challenges in Nigeria”.

However, despite all the happenings, Caverton has not made any comment or tried to ameliorate the situation as traffic continues to build while potential air travellers are caught in the middle.

While some are confused as to when the traffic will abate, others have taken destiny into their hands and have commenced the endurance trek to get to whatever destination they plan to.
As at the time of this report, the 9 members arrested have been released but unfortunately all of them were reported to have been severely beaten by the police while in their custody with the bottom of the gun, one of them is said have sustained in jury in the eye

The crisis manifesting at Caverton Helicopters  bordering on unfair treatment of staff  is not happening for the first time as a similar scenario played out  in 2016.

Recall, unions including NAAPE, NUATE and ATSSSAN shut down Caverton Helicopter after it sacked no fewer than 150 staff from its payroll, a development that has angered the unions who in turn declared total war against the airline management.

The retrenchment exercise began then with the distribution of letters to the affected staff, most of which are non-technical staff.

Nigerianflightdeck is an online news and magazine platform reporting business stories with a bias for aviation and travel. It is borne out of the intention to inform, educate as well as alter perceptions with balanced reportage.
Previous UK Company demos automatic aircraft firefighter simulator as Nigeria set to take delivery
Next FAAN warns casualties video spreaders of Imo Airport fire incident to stop