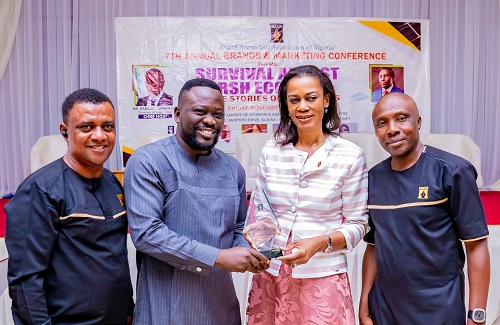 Atta, beat other nominees to the prize as a result of her impressive contributions at the steer of UBA’s corporate Communications with various laudable initiatives that have further increased the banks market share and brand presence ahead of competition.

The successful organisation of the UBA Market Place, which took place in Abuja last July; positioning UBA as a foremost pan Africa Bank and the birth of REDTV, the fast-paced digital lifestyle channel were some of her achievements which were read out as she received the award.

UBA’s CSR arm, the UBA Foundation was crowned best institution in support of Education(CSR) 2019 for its dedication to improving access to education on the continent, particularly through the National Essay Competition where students have received grants from the foundation, for the past 9 years, at tertiary institutions in Africa.

Speaking about the National Essay Competition as she thanked the BJAN for the awards, Atta said “it is always such joy to see winners of this competition each year and to know that with the grants that they receive to go to university, they will be changing their lives, the lives of their families and impacting their communities positively.” Education remains one of the main pillars of the UBA Foundation.

Since 2012, The Brand Journalist Association Conferences Awards- have been celebrating outstanding companies who through their immense contributions have become the game changers driving the wheels of growth for brands and by extension development in Africa.

The President of BJAN, Princewill Ekwujuru, commended UBA Foundation for its strong footprint across Africa.  “Through its Read Africa Initiative and the scholarship grants given to winners of the National Essay Competition, the Foundation has done very well to transform the lives of many’.

He said the awards were borne out of the need to recognise the Game Changers whose relentless contributions have helped give hope to Africa and at the same time, drive sustainable development amid strife.

“For these companies, they understand that agility, innovation, fluidity, decisiveness and commitment accelerate the pace of change, Africa craves for” he stated.

Nigerianflightdeck is an online news and magazine platform reporting business stories with a bias for aviation and travel. It is borne out of the intention to inform, educate as well as alter perceptions with balanced reportage.
Previous House Committee seeks FAAN’s 25% remittance for airport infrastructure development
Next House Aviation Co’ttee to assist AIB get first responders’ collaboration during crisis