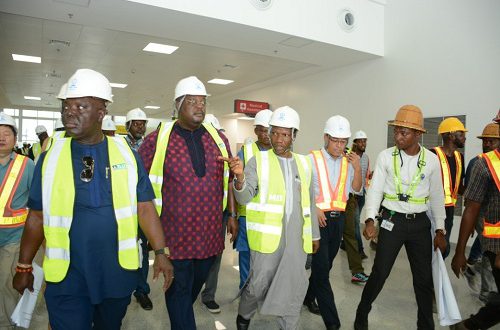 CHAIRMAN House Committee on Aviation, Honorable Nnolim Nnaji has asked the Federal Government to create a consolidated account from the 25% remittance of the Federal Airports Authority of Nigeria (FAAN) and put in place a 10-year developmental plan as the agency’s budget allocation alone cannot foot the huge developmental upgrade the agency is embarking on.

This is just as he has said as members of the House with the support of other committees, they will wade into the matter of debt owed FAAN by Asset Management Company of Nigeria (AMCON) managed airlines as it will not let the airport authority bear the burden alone.

Hon Nnolim made this known after a tour of facilities at the Murtala Muhammed Airport in company of the FAAN’s Managing Director Captain Rabiu Yadudu and other management staff, stating that improving airport infrastructure is critical not just to aviation as an industry but to Nigeria as it will explore other areas of development.

He said, “We believe FAAN needs funding like every other agency in the aviation sector, But part of our plea to Federal Government as way of helping FAAN as a way of aviation infrastructure is that the 25% remittance of FAAN to the Federal government that Federal government should find a way of creating a consolidated account where these funds be remitted to and create a 10 year developmental plan to enable FAAN come up with a 10 year developmental program on how they should put their infrastructure.

“It is not just about the yearly budget, he said,” but it’s about creating a 10-year plan that can enable them have long term projects that will live beyond a managing director.”

“The problem we are having is that an md would come in and want to create their program, but if you have a 10-year plan that the federal government is involved through the ministry of finance, budget and other agencies, we have a consolidated account so that whatever project that is coming will live beyond the FAAN management.

Hon Nnolim said the security situation on the roads has made more people turn towards flying as a means of travel and that this gives the country a unique opportunity to improve on the sector’s infrastructure tremendously.

According to him, investment in aviation is important because as the first point of call to a nation, the gateway will tell an investor whether to proceed into the country and invest or leave stating that infrastructure development should be seen as an all-encompassing thing for national development, not just FAAN.

“Look at what is happening in Nigeria today, the security situation is bad on the roads and this is an opportunity to improve on the aviation industry because a lot of people are now looking towards the airports and businesses, we cannot talk about investment, an investor’s first point of call is the airport, if you have a good airport an investor who comes in would want to double his investment; if you also have a bad airport an investor will look down on the country and probably good back with his money. So I think airport infrastructure should be very critical, not just to aviation ministry or FAAN but also to Nigeria because it’s going to explore other areas of development.

Speaking earlier, Managing Director of the Federal Airports Authority of Nigeria (FAAN) Captain Rabiu Hamisu Yadudu told the House Committee on Aviation that it intends to provide a mono rail from the Ikeja Transport Terminus to the Murtala Muhammed International Airport (MMIA) to ease facilitation.

He said that the airport authority is seeking the House support to tackle some of the constraints that have hindered the authority including the backlog of high debts arising from prior year’s revenue generation.

Captain Yadudu talked about infrastructure stating that some need to be in place including rehabilitation of the domestic and international runway and completion of taxiway B and Air Field Lightening (AFL) of domestic runway to ensure the MMA is used optimally.

” We have two runways 18L and 18R but once is dusk one becomes useless because it can only take daylight operation and that is why we need to provide AFL so in case you have to shut a runway down you can use the other.”

The Oversight took the team to the FAAN Training School, the Power House, the new MMIA Chinese-Nigeria funded terminal as well as the Airside between the Runways 18 Left and 18Right.

On debts owed FAAN, he said,” Well, It’s not under our committee’s responsibilities but as members of House of Representatives and as stakeholders we will not allow FAAN to carry the debt alone. We are definitely going to pursue it. Luckily we also have people that are in the finance committee as members of the aviation committee so the will come together and see it as a huge burden on us and see how we can support FAAN”

Nigerianflightdeck is an online news and magazine platform reporting business stories with a bias for aviation and travel. It is borne out of the intention to inform, educate as well as alter perceptions with balanced reportage.
Previous NIS rescues 150 suspected human trafficking victims at MMIA, processes 58,000 pax on VoA in 12 months
Next UBA bags Best CSR Company in support of Education; Corporate Affairs Professional for 2019