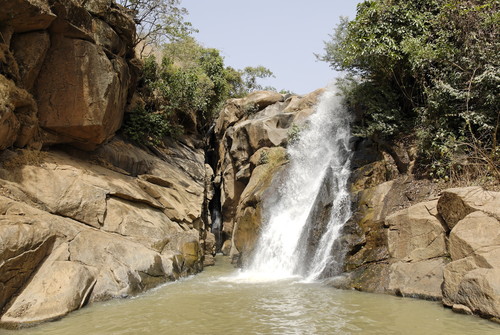 Share
THE state of Plateau is truly blessed, situated in the tropical zone of the Middle Belt Region of Nigeria, in fact Plateau is in the centre of the country and can boast of one of the best of climates in the country.
Plateau State, known as The Home of Peace and Tourism, has a lot of sights, traditional architecture, zoos, wild life parks with animals like buffalos, lions, leopards, baboons, monkeys, derby elands, pythons, crocodiles, chimpanzees, jackals and the rare pygmy hippopotamus.
With divers’ ethnic groups and different languages, English is the official language in Plateau State; Hausa is also a common universal medium of communication and commerce as is the case in most parts of the North and Middle Belt of Nigeria is the main occupation.
The State has unique and beautiful climate that is conducive for the production of cotton, groundnuts, rice, Irish potatoes, maize, soya beans giving it a very strong agriculture potential.
Sadly the state’s beautiful scenery and image and all its potentials has been marred by recent skirmishes and violent clashes that have taken lives, however, it still does not take the loveliness of the place that is populated by over 3.5 million people away
The state can also boast of is an abundance of relaxation sites that go beyond seeing the animals and enjoying the weather and food.
One thing for sure that piques the interest of many a tourist to the state are the waterfalls of which Assop Falls is perhaps, the most notable  the state and perhaps the country Nigeria’s many waterfalls.
This fall is located at the edge of the Jos Plateau, about 40 miles (64 km) from Jos city, on the road to Abuja, this is a popular tourist stop for picnicking, swimming and enjoying the scenery. Assop Falls has also proved popular with people shooting local soap operas and advertisements
AESTHETICS
This incredible avalanche of water gushing down does not do still photography justice as its true beauty is by looking at it up-close and personal and exploring its beauty first hand or even having a picnic there while listening to the sound of water surging down the steep valley and emptying into the water below.
Assop Waterfall occurs naturally at the bottom of the famous Hawan Kibo, a rocky uneven hill stretching a long distance below which members of the immediate community live and by which the community, some 61 kilometres from Jos, is named.

The silence before getting to the waterfall itself is occasioned various songs or different birds chirping while creating rhythmic music to the ear only to prepare you for what comes next…Assop Waterfalls flooding down the valley with an intensity that will send a shrill of excitement through your heart and make you wonder of the awe of creation of such beauty only nature can truly boast of.
There are concrete rock formations in between that lead to the waterfall site, either side surrounded by thickets

ECONOMY
Sightseeing the majestic waterfalls costs a tourist a paltry N50 (personally, I think it should be reviewed), however a tourist or anyone seeking to access the waterfall has to pay N300 more if he is to take photographs. People desiring to hold a meeting at the place are charged N3, 500. Group picnic goes for N4, 000. The item tagged Ceremony attracts N4, 500 while artists asking to shoot a movie with the Fall as background scenery, pay the highest fee charged by the Fall site managers: N18, 000.
FANTASY
The Assop Waterfall according to local folks is believed to house spirits, and that the spirits have been the causes of the deaths that have occurred there. Giving credence to the belief that spirits were responsible for the incidents, our guide said the spirits often used the beauty of the water to draw victims into a trance, rendering such victims vulnerable for the deadly slip or jump as the case may be that typically led to death.
REALITY
There is a downside to the majesty of attractions as patronage has sunk like all other places due to neglect and this may not be unconnected to the security challenges that have pervaded the state in some years now and like many other security challenged areas, people just don’t trust their environs.
Our source, who gave us the scoop said that once people become more secure and a modicum of peace is returned to the Plateau, then places like this water fall will pi k up patronage and help earn some good foreign exchange.
There is also the school of thought that if government looks at tourism as a way to earn some foreign exchange it can work of the facilities around the water fall and give it the kind of boost that would attract not repel potential tourists.
In truth the source revealed that the facilities, conveniences, the environment is a total eyesore and not befitting of a place that has potential to earn government billions all year round.
Governor Simon Lalong, in many of his vote-seeking public remarks, talked passionately about how he would develop tourism and make it a huge revenue earner for Plateau State.  That is yet to be seen but for now, he can start with restoring the Assop water falls to its former glory as it needs restoration and fast
In truth, before all the violence that engulfed the plateau it was the hub of tourism and although many plans have been proposed to revamp this state of attractions, nothing has happened but it is believed that if things are put into place and the right investments made in the right area, this sector that could drive this economy can be grown, nurtured and made to bear fruits.

Follow us, tweet at us, comment on our articles correct us if necessary and we will respond to you. If you have any destination where it is hospitable and worthy of Nigerians to go and relax for the weekend after a stress filled week. do send us a mail at [email protected] with your pix and if you want discretion, we would do the article without mentioning your name….

Nigerianflightdeck is an online news and magazine platform reporting business stories with a bias for aviation and travel. It is borne out of the intention to inform, educate as well as alter perceptions with balanced reportage.
Previous Nigerian aviation will compete with Europe within four years if…Captain Mshelia
Next Travel& Explore Nigeria: The Alluring Azumini River (The Blue River)