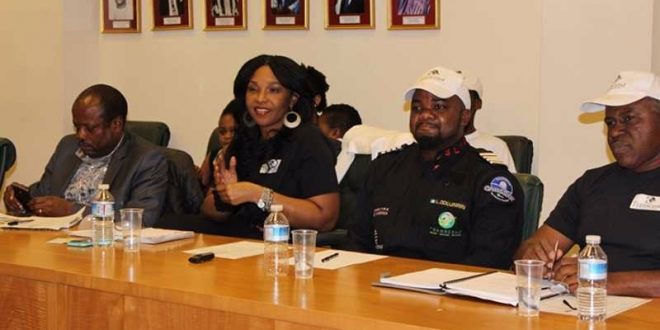 The Initial transcend Project Team with Ms Ireti Bakare-Yusuf handling marketing and media, Captain Lola Odujirin the pilot who flew the world and back and Project Director Mr. Ladi Ani-Mumuney

THE solo flight around the world powered by Transcend has come and gone and the pilot, Captain Ademilola Odujirin has become a media darling. It is an amazing achievement and we congratulate both Captain Odujirin and the Transcend team for making Nigeria and Africa proud.

However, what we cannot help but notice is the conspicuous absence of the only female member of the pioneer team, Ms Ireti Bakare-Yusuf who singlehandedly took care of the media, marketing and promotions campaign for this incredible solo flight.

Further investigations by NigerianFlightDeck shows that not only is Ms Bakare-Yusuf unusually absent from the side of Captain Odujinrin and Mr Ladi Ani-Mumuney (Project Director) at recent press briefings and public appearances, including visits to both the Vice President, Professor Yemi Osibanjo and the Ooni of Ife, Oba Adeyeye Enitan Ogunwusi, her name has also been removed entirely from Transcend’s website.

Questions have risen as to if this is yet another attempt to erase women’s voice and contribution from history making in the Nigeria aviation sector after they have competently midwifed the project, at least the public reception of the project.

After attempts by several journalists to contact Ms Bakare-Yusuf, who brought many of us together at the official launch of the project early last year failed, Nigerianflightdeck contacted Transcend project coordinator, Mr. Ladi Ani-Mumuney for explanation as to why someone so committed and passionate to the point of obsession should not see the project through.

In our telephone conversation with Mr Ani-Mumuney, he stated,” This project is not about individuals but about Nigeria and changing our narrative. We all have relationships that will come and go there is hardly anything scandalous about it. Our project didn’t go exactly according to plan as we were slated to fly from Nigeria and we couldn’t. We wanted it to be a Nigeria-centric project but we ended up flying from elsewhere. The truth is there is nothing worth reporting about it, in a project of this sort some people will move on, it is not only Ireti that has moved on.”

Mr Ani-Mumuney’s response indicates that indeed there may well have been friction in the team.  Whatever friction there might be in the Transcend team, it is a missed opportunity that the name of the only female member of the team has been erased from such history making. What is even more troubling being that the usually vocal Ms Bakare-Yusuf has refused to respond to journalists and not pick her calls.

Nigerianflightdeck is an online news and magazine platform reporting business stories with a bias for aviation and travel. It is borne out of the intention to inform, educate as well as alter perceptions with balanced reportage.
Previous Air Peace type rates pilots on B777 in preparation for international flights
Next NCAA conducts substance test on 87 aviation personnel, suspends one for culpability