AS the Christmas celebrations are fast approaching, it would seem that the level of touting at the Murtala Muhammed International Airport (MMIA)  has increased tremendously seemingly unabated by the authorities who seem to encourage these touts.

It has been learnt that some of the workers at the airport especially Aviation Security, AVSEC, a department under the Federal Airports Authority of Nigeria (FAAN) to engage in money laundering for travellers by carrying their luggage stacked with foreign currencies which are not checked at the screening points by security agents.

Investigation  also reveal  that some other AVSEC personnel scheme with the touts by collecting daily fees per shift from the touts and allow them carry out their nefarious activities unchecked. 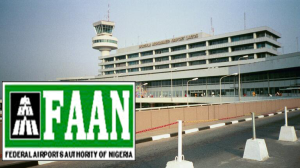 Nigerianflightdeck.com in recent times have identified staff of one Patovilki Industrial Planner Ltd, a company that carries out janitorial duties at the airport as a part of this web of illegalities  and more recently Lakewood Cleaner.

Some of the cleaning service staff engage in the sales of duly stamped yellow cards to passengers, which they sell at between N2,000 and N3,000, depending on your bargaining power without medical examination as required while the same card is received at N1,000 a Port Health office at the airport, after medical examination of impending travellers to some countries, which still require it.

Also, the same staff, abandon their cleaning job and engage in the sales of keys, keys, cello-tape, bathroom slippers, sacks (Ghana Must Go bags) and other accessories at the airport, rather than store owners who rented shops from FAAN at exorbitant rates.

It was observed that for the touts with valid On-Duty-Cards, ODCs, to perpetuate the criminal act, they approach the security agents ahead of their clients who now bargain with them, depending on the amount of money involved.

A source who spoke to some correspondents anonymously said: “The airport is like a market place at the peak period especially during check-in hours. Money laundering, ticket racketeering popularly known as Bingo in the airport and several other criminal activities also take place at the airport.

“All the revenues FAAN is supposed to be making go into individual’s pockets. Also, retired staff of FAAN who once worked in Operations Department and know the nook and cranny of the airport well also engage in touting at the airport. This has been on for long, but is has been difficult to curb because of the involvement of security personnel in the crime.

“These people also engage in money laundering for several people. They go as far as taking their luggage beyond the check-in areas. Though, they do it with the connivance of security personnel at the airport.”

Apart from this, investigation also revealed that staff of security agencies also involve themselves in protocol services by preventing passengers from going through the screening process at the airport.

Nigerianflightdeck is an online news and magazine platform reporting business stories with a bias for aviation and travel. It is borne out of the intention to inform, educate as well as alter perceptions with balanced reportage.
Previous Lloyd’s threatens to blacklist Nigerian airlines, AON blames it on forex scarcity
Next Bristow expects oil market to rise in 2017, plans to re-engage workers