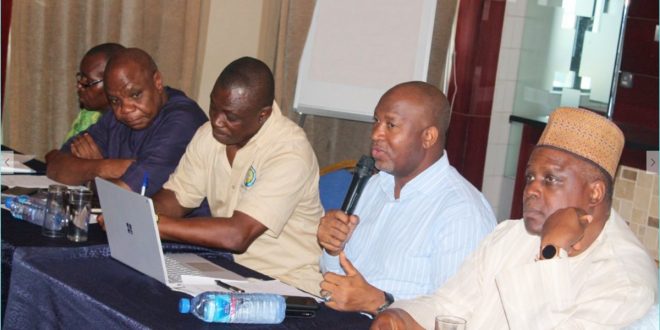 THE melee in the aviation sub-sector over Federal Government’s planned concession of the Abuja, Kano, Lagos and Port Harcourt airports, which will be followed by the remaining 18 airports has  started off with a major plus, as the Minister of State, Aviation engaged major unions on government’s plan to improve on things and do them the right way. The meeting, the first of many, aims at paving way for a smooth and transparent concession of airports to avoid the intentional mistakes made on previous ones.

DIALOGUE, according to government is one way of sorting all the ripples that may arise from its proposed concession of airport facilities and going about it with sincerity is the only way all stakeholders can be convinced of government’s plan for the good.

One thing, however, is that with policies like the ones government have set in motion, there will always be those untrusting and unyielding and with good reasons too, because of previous plans to concession which was done shoddily to help political allies or to enrich government officials.

It is against this backdrop that Federal Government decided to host various stakeholders to allay their fears and to intimate them on government’s plans to grow the industry.

Government, according to its industry driver, the Minister of State, Aviation, Senator Hadi Sirika; identified 26 key areas as major focuses and  narrowed those down into six critical areas that if established and handled properly will grow the industry in leaps and bounds with increased revenue and ultramodern facilities.

Sirika went on to highlight some of these key pillars as establishing a national carrier, establishing a Maintenance Repair and Overhaul (MRO) facility as well as an Aircraft leasing company all privately funded.

However, the bone of contention  laid in governments plan to concession first, the country’s four major international airports, its revenue spinners and then follow-up by concessioning the remaining 18 airports, a plan that has not gone down well with aviation unions who vow to challenge government action.

At the interactive session, Sirika while marshaling out government’s plan stated that government was a responsible, responsive, all-encompassing and participatory government which has the interest of the people at heart stating further that as a socially democratic government, it had to carry all along and hear all the reservations and make clarifications as airport concessioning was the way to go.

He further called on the unions present who had shown their disenchantment at the idea of concession to bring up alternatives on how to build and improve on the airports at their present state, emphasizing that Nigerians were definitely calling for a change in the status quo.

According to Sirika, even if government were buoyant enough to build new ultra-modern facilities, it would take forever as money would have to be put in a budget and approved and then contractors called upon and mobilized with 25 percent which in not enough, in short it would take over 10 years.

He argued that a private investor like those who built airports at Doha, Dubai could provide funding for such a project and accomplish it with ease, giving this country a state-of-the-art terminal facility devoid of the problems of the current ones and after a period, as the term concession implies return said facility to the country.

“Let us tell ourselves the truth, the air conditioners are not working, toilets are not working, the same terminal we have in 1979 is still there and government does not have the money to put the infrastructure at these airports, 22 airports with 2 General Managers at Level 17 each?

He went on to further alleviate their fears stating,” We are not concessioning because we want to cede the assets of government, this is the mere misconception we are a social democratic government and we will not sell or privatize, we will do an open and transparent exercise and we can all discuss if there are any fears you nurse.”

He cited the Dubai and Doha airports which he said had Spars, malls and other super markets but lamented that in Nigeria airport terminals, what passengers see are cigarette and liquor shops, adding that the present government will not allow the terminals to remain like that.

He further called on the unions to participate and be part of the committee so they can express their own ideas and steer the committee right where they go against the proposed tenets, because according to him, two good heads are better than one.

“You get a small shop selling cigarettes and you call it concessioning in Nigeria because the word has been misused but I think we understood ourselves, we discussed, we brainstormed and this is just the beginning of the process but what is critical is that the Project Delivery Team that we set up for the concession, we’ve thrown it open to them that they can come and participate and partake and we are all in agreement that Nigeria needs better infrastructure, Nigeria dies not have the money, Nigeria used to make $140  to a barrel  of 2.2million barrels a day, that’s is $300million dollars a day.”

“Today, we do like 800,000 to $30, $40 per barrel. That is 10 per cent of what we did before. The money is not there, we are in recession it’s been established and the government cannot invest money in infrastructure anymore. We cannot continue also to borrow, what we can do is we can get people willing to bring in their money and invest and get in very quick, finish real quick, make money real quick and get back real quick and bring back the asset to the people.”

However while reacting, the unions designated spokesman, National President of the Air Transport Senior Staff Services Association of Nigeria (ATSSSAN), Comrade Benjamin Okewu, first agreed that concession done in other climes had resulted to increased revenue, building of infrastructure and other developments but the focus of governments plan is to concession the four major airports, a plan the union finds unacceptable.

Okewu held that the unions were not convinced concessions will not affect their workers who are also on other airports stating that although the union was open to discussion, is not in agreement with the plans to concession of the four major airports.

“We are open to discussion but our stand on the concession of the four major airports is a capital No! to the concession of our four international airports. We need government to convince us that this policy of government is not injurious to our workers. We are very much ready to present our issues but for the benefit of this discussion our position is a capital No!”

Okewu went further to highlight major concessions that have left a bad taste in the mouth of Nigerians, like the case of Bi-Courtney Aviation Services Limited (BASL) as well as Maevis Nigeria, both of which on a constant basis has a run in with FAAN because of the kind of inept agreements entered into.

On Maevis, he said it was all sweet and juicy talk to handle FAAN’s revenue only for the Managing Director of that company all of a sudden to start flying a private jet to and from Abuja while FAAN workers were demonstrating to get paid their monthly salaries.

He argued that if they want to concession airports,” why can government not ask these individuals or organizations to be interested in virgin lands to build their airports, why are they waiting for already established revenue spinners? Competition can create improvement and if any investor is willing to go to Akure Airport to generate revenue or increase their revenue that is fine not only waiting for Lagos.”

“Things that make concession all over the world, in South Africa, Ethiopia and all other places is because the conditions to make them work are there. It is not here.”

He further expressed fears about pensions and gratuities of those already working asking if government had put that into consideration before thinking out their concession theory.

However, reacting Hadi Sirika decried the bad taste that the BASL concession has left in the mouth of people stating that this is nothing like the Bi-Courtney concession which according to him, ‘is no concession’.

Sirika recalled that as a member of the House Committee on Aviation then, he recalled they had already given the contract for the Build Operate and Transfer (BOT) to Sanderton who won the bid only for the Minister then, Chief Kema Chikwe after Sanderton had mobilized to site, cancelled that contract on live television, a situation that is costing FAAN millions monthly as Sanderton, who won the bid originally took them to court and got a judgement.

Sirika further stated that government wants to do a transparent concession, where all the information and what it all entails will be out in public domain not a shoddy and shady concession mired in controversy.

He further assured that he would not stand and allow people to lose jobs. Sirika, who gave his word as a bond, told the unionist who expressed fear of job losses and payment of pension that government was not in the business of making people lose their jobs assuring them that with the concession, more hands would be needed.

The minister called on the union for support and understanding stating that the true position is that,” If you say Nigerians want the same situation they have suffered for decades, then you are not speaking the minds of 170 million Nigerians  if we say we want to leave the airport the way it is.”

“You see government has no plans whatsoever to sell national assets but it was sheer misconception to see the unions on the street demonstrating what they thought was sales of the airport. The airports will be concessioned, the big four and then later six of the cargo designated airports and this will help us not just grow and expand the sector but put us in the right path to again be established as a hub.”

He called on the union to join the project delivery committee where they will be able to make cogent input and further the negotiation by stating things that they find inimical.

Comrade Okewu, in his response however said he would like the opportunity to meet with the unions so they can decide whether or not, they can accept the Minister’s invitation to be part of that committee.

Nigerianflightdeck is an online news and magazine platform reporting business stories with a bias for aviation and travel. It is borne out of the intention to inform, educate as well as alter perceptions with balanced reportage.
Previous NCAA cautions passengers on SamsungGalaxy Note 7
Next Lufthansa Group, Air China sign commercial joint venture