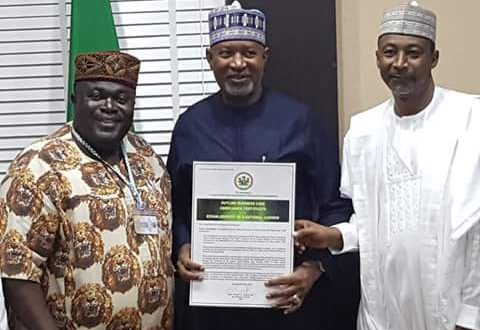 OFFICE of the Honourable Minister of state for Aviation, Senator Hadi Sirika has reacted to statements made by his Ministry of Information and Culture counterpart, Alhaji Lai Mohammed who on Wednesday stated that the Nigeria Air project was suspended because expected investors were not forthcoming.

Deputy Director, Media & Public Affairs, James Odaudu in a statement said the position couldn’t be farther from the truth, as the national carrier project has an avalanche of well-grounded and ready investors.

His statement read,” The Office of the Honourable Minister of state for Aviation has noted, with consternation, various opinions, comments and observations in the media regarding the status and the reasons for the recent suspension of the processes leading to the establishment of a Nigerian national carrier.”

“Among the reasons being bandied around for its suspension, especially in the social media is the absence of interested and ready investors.”

“These include international finance institutions such as the Afro-Exim Bank, African Development Bank, Standard Chartered Bank, aircraft manufacturers – Airbus and Boeing, airlines such as Ethiopian Airlines, Qatar Air etc. and some reputable individuals and entrepreneurs.”

“The office also wants to clarify that the country’s participation at the Farnborough Air Show in the United Kingdom in July was not for the sole purpose of unveiling the Nigeria Air logo as the public is being made to understand. It was also a meeting point with these potential investors who saw the event as another opportunity to market and re-emphasize their interests in the project.”

“It is also pertinent to clarify that the Federal Executive Council only suspended the process for the establishment of the national carrier for the time being. The project has not been killed. These clarifications have been made in the public interest.”

However, despite these reactions, the Minister of Information and Culture, Alhaji Lai Mohammed, had told journalists at the Murtala Muhammed Airport (MMA), Lagos on Wednesday, that some of the investors the government had expected to partner with on the project were no longer forthcoming, adding that the government never wanted to be the sole sponsor of the project.

“The position of government in business is to provide the enabling environment, and it is not to become the sole source of finance or funding and, in addition, there is much more than funding in trying to get our national carrier. So, the Federal Government thinks this thing should be stepped down now until we get a better funding structure.”

Mohammed also emphasised that Senator Hadi Sirika, the Minister of State for Aviation, carried along the government on the entire project, but insisted that the assurances did not materialise.

Besides, he explained that the suspension of the national carrier project would not lead to the suspension of other projects like maintenance repair and overhaul (MRO) facilities, leasing company and airport concession in the sector.

“I don’t think the government should be condemned or criticised if it decides to step down a particular project. I think it is in the interest of the country that we can’t embark on a project which had not been well thought out. Four years is a short time for some things; it doesn’t mean that we have abandoned it,” he said.

Nigerianflightdeck is an online news and magazine platform reporting business stories with a bias for aviation and travel. It is borne out of the intention to inform, educate as well as alter perceptions with balanced reportage.
Previous Azman Air: NAMA says airline never declared emergency
Next Visa on arrival leading to influx of investors through MMIA