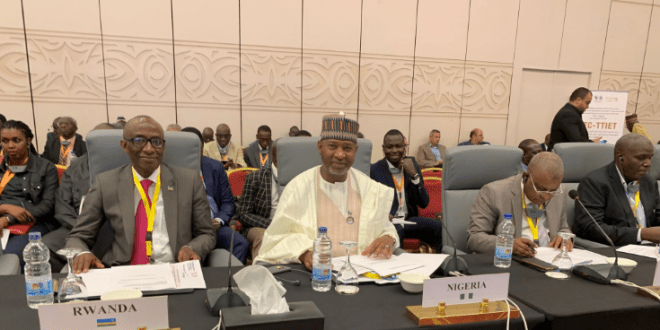 Nigeria’s Minister of State for Aviation, Sen. Hadi Sirika sitting by the Rwanda Minister of Transport at the Second Ordinary Session of the African Union Specialised Technical Committee in Transport, Transcontinental and Interregional Infrastructure, Energy and Tourism in Cairo Egypt on Monday

NIGERIA’S Minister of State for Aviation, Sen. Hadi Sirika has called on states to adopt the Single African Air Transport Market (SAATM) to strengthen air transport liberalization in the continent.

Sen. Sirika made the resolution of the ministers known via his twitter handle @hadisirika at the Second Ordinary Session of the African Union Specialized Technical Committee in Transport, Transcontinental and Inter-regional Infrastructure, Energy and Tourism at the Triumph Luxury Hotel, in Cairo Egypt

Presently, only 28 African countries have so far shown interest to the SAATM and the African Union awaits the decision others to join the train.

According to Africa Union, SAATM is ‘Promoting intra-regional connectivity between the capital cities of Africa by creating a single unified air transport market in Africa, as an impetus to the continent’s economic integration and growth agenda’.

In Cairo, the Ministers unanimously agreed to strategies that would boost infrastructures in Africa. “We, the Ministers in charge of Transport Transcontinental and Inter-regional Infrastructure, Energy and Tourism meeting in Cairo, Arab Republic of Egypt on 16 and 17 April 2019,in the Second Session of the Specialized Technical Committee on Transport, Transcontinental and Inter-regional Infrastructure, Energy and Tourism , organized by the African Union Commission (AUC) in collaboration with the Government of the Arab Republic of Egypt to consider strategies for developing smart infrastructure to boost Africa’s continental transformation and integration,” said the Ministers in Cairo.

“We, the ministers, reiterating our commitment to develop Transport, Transcontinental and Interregional Infrastructure, Energy and Tourism sectors and our strong will to implement the outcome of the meeting as we have agreed.”

The committee of Ministers requested African Union Commission (AUC) to take the appropriate measures to accelerate the development of the African integrated High Speed Railway Network (AIHSRN) flagship project, revitalization of the Union of Africa Railways (UAR) and speed up operationalization of SAATM.

They also called upon the African Development Bank (AfDB) to continue providing support and mobilize more financial resources for priority intercontinental transport sector programmes such as SAATM and implementation of African Plan of Action for Road Safety.

Nigerianflightdeck is an online news and magazine platform reporting business stories with a bias for aviation and travel. It is borne out of the intention to inform, educate as well as alter perceptions with balanced reportage.
Previous FAAN assures of safety as Easter draws closer
Next Air Peace gives a touch of int’l service as it deploys B777 for Easter operations