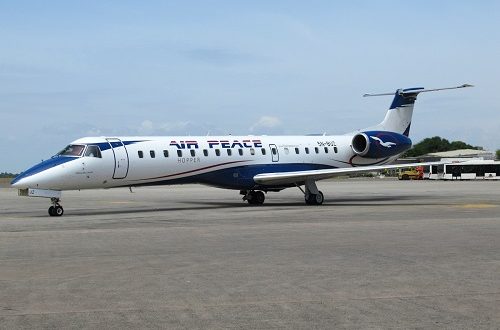 CHAIRMAN of Air Peace, Chief Allen Onyema has said as an airline operator, it is better he shuts down his operations instead of compromising safety because they cannot clear the parts needed service their aircraft properly from the customs.

He made this known explaining his statements made on the customs service stating the sensitive and crucial role aviation has to play on safety and the energizing of the nation’s economy.

Onyema who held a conversation with the media on Thursday after taking delivery of the airline’s second brand new E195-E2 Embraer aircraft explained how everything from maintenance to aircraft acquisition is tied to dollars and the lack of it is affecting the airline.

In his appeal to Nigeria Customs Onyema said, “So what we are saying is that when we bring in this planes we expect expedited clearance from the customs. Customs can charge whatever they want to charge but it can still be discussed. Waivers have been given so we expect that should be respected.

“If an airline is forced to manage parts or is using parts that you know must be removed, it is not good for any airline. That’s what I am trying to say out there, I am not saying that government should shut down any airline, no.

“What I am saying is instead the airlines to do anything that will compromise safety because they were not able to clear their spare parts to repair the plane very well, well then it would be better the airlines on their own shut the operations instead of you to take lives but we can overcome this by letting the customs know aviation is a peculiar business, it is not a profit making business, it is for service and will help to energize the economy of the country. So we plead with them to help expedite the clearance of these planes when we have them.”

He further explained the difficulties in the industry stating that aircraft on ground are a total waste to both airline and country’s economy hence the need for expedited action from the Nigerian Customs in clearing aviation equipment.

“Aviation in this part of the world is very difficult. We get our money in Naira and we have to buy dollars. There are a lot of difficult issues. And to spare parts, to get spare parts into this place is not easy and coupled with COVID a lot of delays and any aircraft on ground that is not being flown is a waste to the economy of not only the airline but the entire nation.”

Onyema also spoke about the airline’s reduced capacity of late stating that a large majority of its aircraft apart from the new ones are held down because maintenance is not going as scheduled and there is paucity of foreign exchange to do all at once.

He said,”COVID-19 has affected us seriously. Most of the countries where we send our planes to are on lock-down and because if this they have not been able to work on the planes delaying the receivers of this planes.

“Air peace have been flying below capacity because 17 aircraft are still on maintenance abroad. Not the brand new ones. The ones we have been flying before, we have 25 of them, they went for C-Check but because those countries are on lock down, it has affected the pace of work in those places and it’s affecting us, that is why we suspended some destinations in Nigeria in other to service those our equipment on ground can service”

“But  this month alone, the Air Peace chairman said, “we are expecting two more planes come in, by April we are expecting another three, by June we are expecting all the old planes would have returned to Nigeria and then there is he thirteen brand new planes so we are going to litter the airspace with aircraft.

Nigerianflightdeck is an online news and magazine platform reporting business stories with a bias for aviation and travel. It is borne out of the intention to inform, educate as well as alter perceptions with balanced reportage.
Previous Pictures as another brand new Air Peace Embraer touches down; NCAT & NiMet handovers
Next NAAPE lauds NCAA‘s refusal for Azman Air to hire expatriate pilots, Engineers