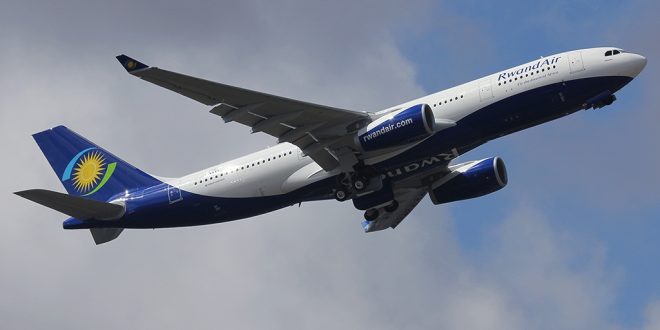 EAST African carrier, Rwand Air has stated that it’s flights between Kigali, the airline’s hub and London Gatwick, in the United Kingdom as well as services between Kigali and Brussels, the Belgian capital aims to bring class and comfort in travel to those routes

Rwand Air commenced the Kigali – London flight in May 26, 2017 while the Kigali – Brussels operations began June 14, 2017 as part of the airline’s routes expansion programme.

Country Manager, Nigeria, Ms Ibiyemi Odusi disclosed this in a statement issued in Lagos describing the additional routes as strategic in the airline’s growth plan which, routes which will offer passengers competitive fares to remain a major player in business.

According to Ms Odusi, the flights are operated by the new Airbus A330 with complete flat bed in Business class, comfortable Premium Economy and Generous Leg Room in Economy cabins.

She listed other features in the aircraft to include free Wi-fi on board all cabins and mobile network.

The airline said Nigerian passengers are treated to good connection time with complimentary accommodation in Kigali to connect flights into London and Brussels.

Odusi spoke of plans by the airline to begin flights into Guangzhou , in China soon.

She said :” We are keeping faith with our promise to give passengers the best services. We are offering competitive fares to endear passengers to our airline. Very soon we will unveil our timeline for expansion into Guangzhou and other upcoming routes.”

Nigerianflightdeck is an online news and magazine platform reporting business stories with a bias for aviation and travel. It is borne out of the intention to inform, educate as well as alter perceptions with balanced reportage.
Previous NAAPE gets new executives, Abednego emerges new President
Next 7 countries to benefit from AIB’s safety Lab