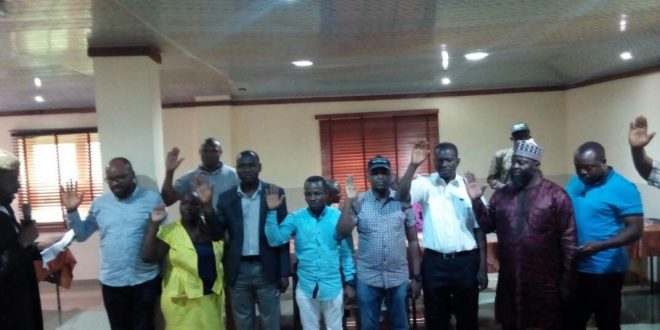 Comrade Charles Erhueh  and Comrade Igwe Francis were both returned unopposed as Financial Secretary and Public Relations Officer of the pilots and engineers association.

The conference commenced around 9:30am at the Apex Hotel and ended with the elections and swearing-in around 5:30pm on the day.

Speaking shortly after the inauguration of the new exco in Port-Harcourt, Engr Galadima said that by the grace of God, he would become a good servant leader of NAAPE, adding that he is going to hit the ground running.

“I want to appreciate each and everyone who participated. I congratulate the out going President and the planning committee of the delegate conference. We are going to promote excellence in the industry through NAAPE Voice. We will also use it to generate revenue for our union. We will continue with the great works of the past exco”.

Galadima who immediately announced the appointment of Mrs Kyola Dyaji as the new women commission leader said the lady will see to the affairs of female Pilots and Engineers.

“Our watchword is that any injustice in any branch is a threat to all our branches. I specifically appreciate Engr Roland for making sacrifice for the association”, he said.

In his comment, out going president of NAAPE, Engr Isaac Balami said that the election was very credible, enjoining his members to be law-abiding at all times.

Balami while confirming that the election was free and fair said he never expected less as all of them are exposed professionals.

The election was preceded by national delegates conference and symposium held at the Hotel Presidential Port Harcourt.

The conference with the theme: “The role of AviationProfessionals in Aviation Development” attracted industry players and people from all walks of life including the former governor of Akwa Ibom State, Air Commodore Indongesit Nkanga, former Director General of the Nigerian Civil Aviation Authority NCAA, Engr Benedict Adeyelika amongst others.

Nigerianflightdeck is an online news and magazine platform reporting business stories with a bias for aviation and travel. It is borne out of the intention to inform, educate as well as alter perceptions with balanced reportage.
Previous Dana Air introduces ‘Buy Two, Get One Free’ promo to Owerri
Next Rwand Air entices passengers to enjoy Kigali – London, Brussels services