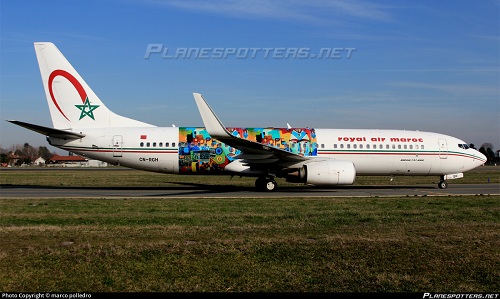 BARELY two weeks after a Royal Air Maroc flight with registration number CN – ROR landed at the Murtala Muhammed International Airport and it was discovered that its baggage cabin door was open, another flight belonging to same airline returned to the MMIA when it discovered its cargo door light flickering.

The pilot flying the B737-700 belonging to Royal Air Maroc with registration number CN-RNQ discovered that the cargo door light was flickering on and despite the Aviation security escort visual observation that the Cargo door was closed, he alerted the control tower, requesting to return back to the apron, at the Murtala Muhammed International Airport Lagos, at about 05.30 hours today, October 20, 2019.

In a statement made available by General Manager Corporate Communication, FAAN, Mrs. Henrietta Yakubu, officers of the Aviation Security swiftly escorted the aircraft and returned it back to the apron, on reaching the apron, all concerned officers of FAAN and other agencies were on ground for thorough inspection.

In line with standard and recommended practices, all parties concerned supervised the offloading and the re-screening of all the luggage belonging to all passengers on board the aircraft.

All the luggage belonging to the passengers were intact as certified by the team on ground before the flight eventually took-off at 10.06 hours in the presence of the Airport Manager and Chief Security Officer of the Airport.

Recall, the Royal Air Maroc flight with registration number CN – ROR landed at the Murtala Muhammed International Airport at about 0404hours today October 11, 2019 and it was discovered that its baggage cabin door was open.

Although the open cabin door led to a lot of speculation as to how it happened, nothing was discovered taken from the cabin as witnesses seem to think the cabin flung open when the aircraft landed and further investigation revealed that all passengers on the flight got their luggage intact, except for a certain Tazi Larbi, whose luggage with tag number 829116 did not come on the flight because it was left in Morocco

Nigerianflightdeck is an online news and magazine platform reporting business stories with a bias for aviation and travel. It is borne out of the intention to inform, educate as well as alter perceptions with balanced reportage.
Previous International ATC Day: NATCA solicits more funding, increase of retirement age
Next ICAO appoints AIB’s Engineer Erhueh as BAGAIA new helmsman