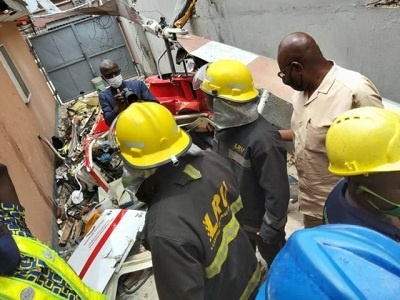 Rescue officialstrying to salvage the wreckage of Bell helicopter 206B3 with registration Marks 5N-BQW operated by Quorum Aviation which crashed at the Opebi Area of Ikeja Lagos.

QUORUM Aviation has said that the company has all the requisite certificates and approvals which according to the airline are current and valid as issued by the authorities following due process.

The airline which suffered a crash with its Bell 206 Helicopter with registration marks 5N-BQW that claimed the life of the three crew onboard may be reacting to a report written in 2017 questioning the aircraft airworthiness that emerged.

According to the airline management, ” Quorum Aviation Limited is compelled to make a few clarifications regarding the unfortunate helicopter accident which occurred on Friday, August 28, 2020 that claimed the lives of three of our staffs who were onboard the aircraft.

“For the avoidance of doubt, Quorum Aviation Limited is a responsible corporate entity that adheres to, and complies with all the rules and regulations pertaining to the aviation industry as laid-out in the Nigerian Civil Aviation Regulations (NCAR).

“The company has all the requisite certificates and approvals obtained through a very rigorous process, including inter alia an Air Operator Certificate (AOC), Certificate of Airworthiness (COA) and Insurance.

“All our certificates and approvals are current and valid as issued by the authorities following due process.

The airline called for understanding and avoidance of speculation from the media to enable the Accident Investigators carry out their duties.

The statement read,”During this difficult time, we crave the indulgence of media to refrain from conjecture and speculation, and to choose instead to await the outcome of the Accident Investigation Bureau (AIB) investigation into the cause of the mishap.

Our thoughts and prayers remains with the families of the departed .

Nigerianflightdeck is an online news and magazine platform reporting business stories with a bias for aviation and travel. It is borne out of the intention to inform, educate as well as alter perceptions with balanced reportage.
Previous Helicopter crash: Nnaji expresses sadness, condoles families of occupants
Next S’ East Governors, bigwigs hail President Buhari as Enugu Airport reopens