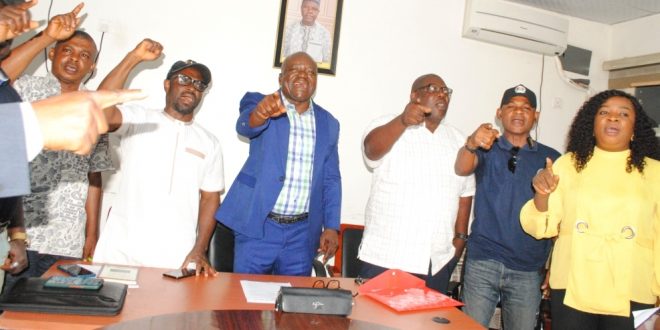 Joint unions including the National Union of Air Transport Employees (NUATE), Air Transport Senior Staff Association of Nigeria( ATSSSAN), National Association of Aircraft Pilots and Engineers( NAAPE) planned a peaceful demonstration from Monday September 12, 2022 and a total industrial action after a 14 day period in a bid to tackle a perceived threat to their existence. READ MORE: Unions to protest ‘smuggled’ repressive clauses into Aviation Acts to proscribe unionism

They claimed some obnoxious clauses were recently added to the Aviation Bill presented to the president to accent into law.

The unions have also said the clauses maliciously added by the powers in the industry not only to prohibit trade union activities in the aviation industry in Nigeria but totally obliterate aviation unions.

“67. (1) All services which facilitate and maintain the smooth, orderly and

safe take off, flight and handling of aircrafts and the, disembarkation and

provisions of section 11 (I) of the Constitution of the Federal Republic of Nigeria.

“(2) The Minister may by regulations prohibit all or such class or classes of workers, officers and other employees of persons whether corporate

or natural, engaged in the provision of the services specified in subsection (1) of this section from taking part in a strike or other industrial action. (3) In this section, “strike” means the cessation of work by a body of persons employed, acting in combination or a concerted refusal or a refusal under a common understanding of persons employed to continue to work for an employer in consequence of a dispute, done as a means of compelling their employer, or the Government of the Federation of Nigeria or any part thereof, or to aid other workers in compelling their employer or any persons or body of persons employed, to accept or not to accept terms of employment and physical conditions of work or any

government economic policy or pricing of any essential product; and in

and (b) “refusal to continue to work” includes a refusal to work at usual speed or with usual efficiency.

With plans to commence their protest on September 12, Comrade Ocheme Aba who spoke on behalf of other unions demanded,”As the leadership of the Senate and House Committees on Aviation have denied knowledge of the obnoxious clauses in the bills, it has become absolutely necessary to identify how these clauses found their ways into the Bills transmitted to the President.

Recall that during the public hearings in the Aviation Committee of the House of Representatives, issue of essential service was responded to by the National president of NAAPE who drew attention to a National Industrial Court ruling on the matter, to the effect that Comrade Aba further stressed that the matter was rested at that, but said it was baffling, how the clauses mentioned above found their way surreptitiously into the Bills.

The unions insisted that the culprits be exposed and punished stressing that obnoxious clauses are in heavy conflict with prevailing national and international laws (as ratified by Nigeria) and cannot find a hiding place in an aviation conclave.

As it stands currently, in other not to fall victims to their own contraptions, the unions need to be sure of their arguments before embarking on a journey that may mar the body.

Nigerianflightdeck is an online news and magazine platform reporting business stories with a bias for aviation and travel. It is borne out of the intention to inform, educate as well as alter perceptions with balanced reportage.
Previous NIGAV business summit holds, to examine synergy among air transport sub-sectors
Next Inter- agency spat: ATCs in Kano plan to down tool as FAAN disconnects power over N500m debt