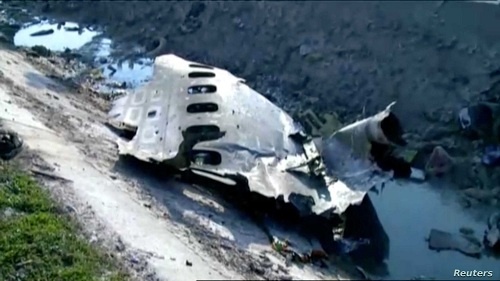 Part of the wreckage from Ukraine International Airlines flight PS752, a Boeing 737-800 plane that crashed after taking off from Tehran's Imam Khomeini airport on January 8, 2020, is seen in this still image taken from Iran Press footage.

ONGOING rift between Iran and the United States of America may be the reason Iran Civil Aviation Authorities has said it would not hand over the one ‘Blackbox’ recovered from the Ukraine International Airlines Boeing 737-800 passenger jet which crashed shortly after take-off  on Wednesday morning to American aircraft, manufacturer, Boeing.

So far, Nigerianflightdeck is yet to ascertain whether the blackbox recovered was the Cockpit Voice Recorder (CVR) or the Flight Data Recorder (FDR).

The head of Iran’s civil aviation authority, Ali Abedzadeh, said Iran will not give black box to Boeing, and did not appear to specify a reason, understandable because of the ongoing rift between the United States, where Boeing is manufactured and Iran.

CVRs and FDRs (Black boxes) record audio from the cockpit and flight data providing valuable insights into how a crash took place.

Abedzadeh also said he wasn’t sure where Iran would send the box to analyze the data, Reuters cited Mehr as reporting.

According to Article 26 of the Convention on International Civil Aviation (Chicago Convention) states that, in the event of an accident to an aircraft of a Contracting State occurring in another Contracting State, and involving either death, serious injury, or serious technical defect in the aircraft or air navigation facilities, the State in which the accident occurs will institute an inquiry into the circumstances of the accident.

Iran by Article 26 may institute the investigation as the State of Occurrence but may need input from the aircraft manufacturers, Boeing as the Article makes provision for the manufacturers to be involved.

Annex 13( Aircraft and Incident investigation) to the convention provides further international requirements for investigation giving participatory rights to State of Occurrence, Registry, operator, design and manufacture; while defining their rights and responsibilites.

So the present impasse will be monitored carefully.

Meanwhile, Ukraine International Airlines has suspended flights to Tehran indefinitely. The airline said that the 3-year-old aircraft had had its last scheduled maintenance on Monday.

The country’s foreign ministry has also refused to rule out that the plane that crashed in Iran and killed all 176 on board was struck by a missile.

Asked at a briefing in Kyiv if the plane could have been downed by a missile, Ukraine’s Prime Minister Oleksiy Honcharuk refused to rule it out, but cautioned against speculation until the investigation concluded.

Major international airlines are canceling and re-routing flights in the Middle East after Iran fired more than a dozen missiles at two Iraqi military bases that house US forces.

Air France (AFLYY), Lufthansa (DLAKY), Malaysia Airlines and Taiwan’s EVA Air said they were avoiding the airspace above Iran and Iraq. Singapore Airlines (SINGF) said it would not fly over Iran.

The Federal Aviation Administration (FAA) meanwhile restricted commercial US flights “from operating in the airspace over Iraq, Iran, and the waters of the Persian Gulf and the Gulf of Oman.” Authorities in Russia recommended the country’s airlines avoid the same areas.

Nigerianflightdeck is an online news and magazine platform reporting business stories with a bias for aviation and travel. It is borne out of the intention to inform, educate as well as alter perceptions with balanced reportage.
Previous No survivor as Ukrainian passenger aircraft crashes with 176 on board
Next Despite acquisition of $8.5m calibration aircaft NATCA worry over degraded NAVAIDS