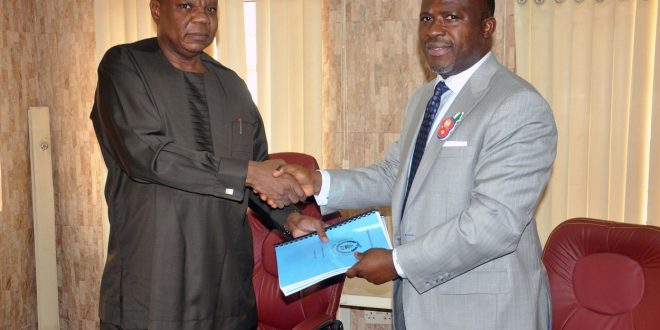 NEW Commissioner of Accident Investigation Bureau, AIB, Engr. Akin Olateru has said that his vision at the agency is to make it the biggest in the nation’s aviation industry with priorities on staff training and technical know how.

This is as he appealed to management and the entire staff to cooperate with him in order to propel the agency forward.

Olateru stated this yesterday at the handing-over ceremony at the agency’s headquarters at Murtala Muhammed Airport, MMA.

Olateru commended the immediate past Commissioner, Dr. Felix Abali for improving the parastatal from where he met it and keeping it together over the years despite the challenges.

Olateru also promised to make training a priority for all staff, stressing that through this, their technical know-how would improve.

He said: “I thank you for keeping this place together despite the missiles. I have heard a lot about AIB. I know it is the smallest in the ministry, but, before the end of my tenure, I will ensure that the agency becomes the biggest of all. That’s my mission.

“However, for that to happen, I will require the maximum cooperation of all staff. I can’t do it alone, but we are here to make it happen. It is for the benefit of all staff of AIB if we can make this organization to work. It’s not about size sometimes, but about efficiency and effectiveness.

“This is a new dawn and I am begging everyone to give this new administration a chance. Whatever that has happened in the past, let it be in the past. Aviation is highly technical, very expensive and the most regulated in the world. At the end of the day, we are all going to be happy because everyone will go on training and more opportunities would be given to people.”

Earlier, Abali commended the entire staff for their support towards him as the Commissioner of the agency and called on them to support the new administration.

He, however, appealed to some of the disgruntled elements in the system to sheath their sword for the growth of the organization.

“I thank the management and staff for their supports for me through thick and thin. And for those who were bent on destroying the agency, I don’t know what else to tell them to change their minds. I’ve spoken with them, but all to no avail,” he said.

Akin is passionate, “breaths and dreams aviation and aviation safety” and has strategically grown his career pathway through the core aviation units of aircraft engineering maintenance, ground handling and airline passenger and cargo transport operations in the bid to becoming well-rounded and grounded in the business of air transportation.

An Aircraft Maintenance Engineer with Nigerian, UK and USA licenses, he began his career in engineering maintenance with Pan African Airlines and the Nigerian Police Air Wing from where he left Nigeria for further studies abroad; in the course of which period he also worked with multiple airlines in Europe including KLM, Martin Air in Holland, British Aerospace Engineering UK and British Midland Airways UK.

On his return to Nigeria in 2003 and armed with an M.SC in Air Transport Management from the City University, London (the 2nd Nigerian citizen to bag that degree at the time), where amongst other specializations he studied and made in-depth research and simulations into accident investigations at post graduate level, Mr. Olateru worked with Skypower Aviation Handling Company Limited (SHACOL) a 100% government owned company prior to its Privatization.There he served sundry roles including Head Safety and Quality Assurance and Group Head Operations, Marketing and Business Development during which time he developed and supervised organization wide safety and quality management systems bordering more than 10 internal departments with over 1,000 staff strength; drastically reduced incidents and accidents resulting in significant cost savings, through a well formulated, articulated and awareness program initiative of hazard identification and risk mitigation procedures across 19 airports station offices in Nigeria; and increased company revenue generation by over 120% within 18months.

It is worthy of note that in the history of SAHCOL, he was the first and only person to have superintended 3 departments of such enormous responsibility all because of his avowed leadership qualities.

He has successfully set up and managed two airlines, the latter being Omni-Blu Aviation Limited incorporated in 2013 and duly granted an Air Operators’ Certificate by the NCAA in December 2015.

As CEO he has grown the company into a multi-million dollar organization in contracts and strategic partnerships within 12months of obtaining its license.

Nigerianflightdeck is an online news and magazine platform reporting business stories with a bias for aviation and travel. It is borne out of the intention to inform, educate as well as alter perceptions with balanced reportage.
Previous Sirika receives Singaporean trade delegation, re-echoes need for airport concession
Next AON elects executives for another tenure, hails appointment of members