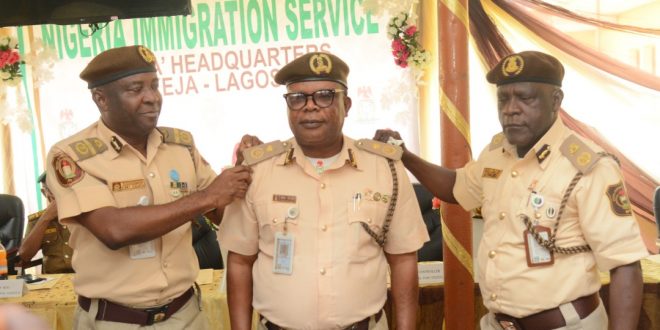 ZONAL Coordinator, Zone A, Nigeria Immigration Service ( NIS), Assistant Comptroller General ( ACG), Olakunle Osisanya had told newly promoted officers of the service not to relent in giving their all as management strives to continue providing an enabling environment for then to thrive.

This is just as he urged then to continue seeking knowledge as the 21st century NIS is a knowledge-based, ICT driven agency.

ACG Osisanya made this known at the decoration ceremony of 298 newly promoted and upgraded officers in Zone ‘A’ at the Zonal Headquarters in Ikeja, Lagos.

The breakdown, according to the ACG noted that of the 298 officers in the zone included 244 were promoted and 54 officers were upgraded to the rank of Assistant Superintendent II.

The ACG during his address stressed that the massive promotion is a demonstration of the Comptroller General of NIS, Isah Jere Idris resolve to tackle staff welfare as one of his administration’s three pivotal tenets, stating that this promotion is essential in improving personnel’s productivity.

The ACG congratulated family members for supporting their own to attain the promotion stating that without their support, they may not have had the peace of mind to be dedicated to their duties.

ACG Correctional, Ayelewon Noel providing succor for those yet to feel the joy of promotion, told the gathering that they will get their elevation on due time and should take the promotion in good faith. He however explained to those promoted that it comes with additional responsibility, discipline, change of lifestyle and a high level of decorum, charged them to improve in all spheres of their lives.

Giving the vote of thanks, newly promoted Deputy Comptroller Immigration, DCI Raphael Ojo pledged the loyalty of the newly promoted officers asking the service to depend on them with regards increased responsibilities.

He thanked the Minister of Interior, Ogbeni Rauf Aregbesola for the opportunity to serve and the Comptroller General for making one of his tenets of officer welfare come to pass.

Nigerianflightdeck is an online news and magazine platform reporting business stories with a bias for aviation and travel. It is borne out of the intention to inform, educate as well as alter perceptions with balanced reportage.
Previous Remit legacy debt monthly or risk AOC, ATL renewal, NCAA tells airlines
Next ASKY expands fleet with 12th aircraft marking 12 years in service