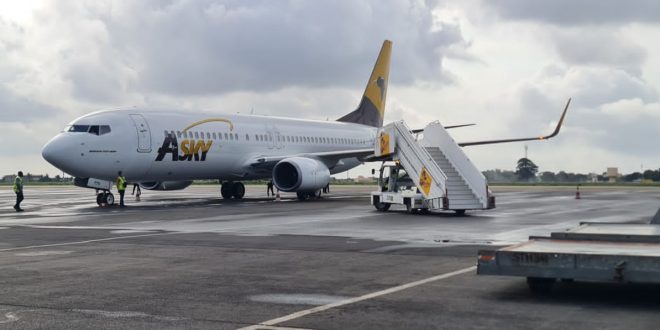 ASKY, has added a twelfth aircraft to it’s fleet as the Pan African Airline acquired another Boeing 737- 700 with tail number 5V-TTV on September 02nd, 2022.

The airline which is also marking also 12
years of service in Africa says this modern aircraft will be used to improve connectivity, increase frequencies and open new routes across the region.

A statement by the airline management read,”We thank you very much for your usual patronage as we continue to offer you with the required services to meet your travel demands.

Chief Executive Officer of ASKY, Esayas Woldemariam Hailu speaking said ASKY is 12 and having received it’s 12th aircraft the Lome-based carrier is poised to increase the number to 20 in the next 5 years.

He said, “This is the 12th year of Asky, since inception in 2010, and in these dozen of years, numerous airlines were born and died in the region. Asky is here to stay, alive and thrive growing in destinations to 25, and in aircrafts to 12.

“Today we brought our 12th aircraft at our 12th year of formation, and this is the very first aircraft to be registered in Togo, which makes is a historical land mark.

“In the next 5 years, we plan to grow to 20 aircrafts and launch more routes in Africa and elsewhere.

He continued, “Not only route expansion, we also plan to build Maintenance and training centers to serve the region, thereby turning Lomé a mega aviation hub.

Nigerianflightdeck is an online news and magazine platform reporting business stories with a bias for aviation and travel. It is borne out of the intention to inform, educate as well as alter perceptions with balanced reportage.
Previous NIS Zone A Command decorates 298 officers as ACG Osisanya calls for dedication
Next NIMASA donates medical equipment to FCT hospitals