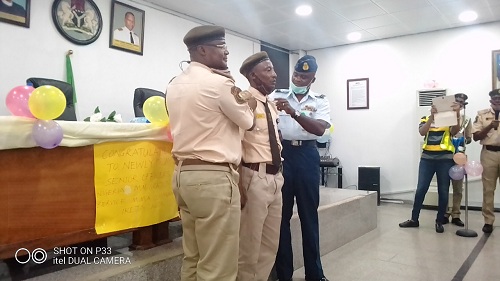 EIGHTY-nine (89) of the eight thousand nine hundred and ninety-nine (8,999) men promoted to senior officers by the Nigerian Immigration Service (NIS) were decorated earlier and advised to be responsible and diligent.

In a brief ceremony, the Comptroller  Abdulahi Usman said it was a privilege to be promoting such extra ordinary officers some of whom he trained as cadets admonishing them not to rest on their oars as the promotion is not the pinnacle  but an added responsibility meant to spur them to greater heights.

According to him, responsibilities such as this gives people a change of perspective enjoining the officers to understand the true value of their functions which include airport facilitation, trade facilitation as well as the ease of doing business.

He said,” I am privileged that I am decorating my former cadets and this is my day as far as I am concerned. This elevation comes with responsibility; it will spur you to do more. It comes with a message that we have to do more in all areas of our responsibility especially seamless passenger facilitation we have no reason not to deliver.

He further urged the officers to think outside the box and avail themselves to  opportunities that would aid them post service as the Controller General of Immigration, Mohammed Babandede has continued to reiterate that planning for retirement is a key step towards a happy retirement.

South West Regional Manager, Federal Airports Authority of Nigeria (FAAN), Mrs. Victoria Shinaba in her goodwill message congratulated the officers also harped on their promotion as a needed incentive to do more.

“When people travel into this country, forget COVID-19 and Ebola, Nigerian Immigration is still the first point of contact and the face of the nation. Once they meet you they have met us as people so be good ambassadors to the service and to the nation,” Shinaba said.

Airport Commissioner of Police, MMA, Ndatsu Aliyu Mohammed who also gave a goodwill message stated the promotion of the officers were not just done haphazardly but followed a process that mirrors hard work.

He said,” with promotion comes responsibility, promotion is not a free for all, it is an exhibition of hard work and so I enjoin you to be hard working and dedicated to your responsibility.

Responding on behalf of the officers, SA to the Comptroller thanked the service for the opportunity and appreciated the Comptroller for his dogged tenacity in ensuring everything works accordingly.

He said,” What we are seeing today is a product of performance evaluation. Our appreciation goes to you for your support, instruction and guidance throughout the period”

Nigerianflightdeck is an online news and magazine platform reporting business stories with a bias for aviation and travel. It is borne out of the intention to inform, educate as well as alter perceptions with balanced reportage.
Previous NIS reels out nation-building contributions says passport issuance just 5% of functions
Next Customer Service Week: UBA plays up customer satisfaction on innovation, upgrading banking platforms