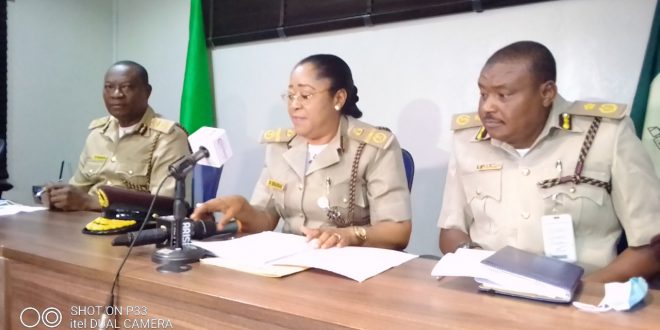 This is just as the service insists there is enough passport booklets to go round as reports of scarcity are exaggerated by touts who use that as a ploy to draw in unsuspecting applicants in a bid to charge them more on passports.

Newly appointed Assistant Comptroller General (ACG) Zone A, Mrs. Doris Briamah who made this known earlier today explained that the NIS has made a lot of advances with regards technology that will ease application calling on Nigerians to take advantage of these instead of putting their trusts in yours.

In an intro statement titled: The power of positive news in nation building, Mrs. Briamah harped on the influence of positive projection of the nation stressing that the Nigerian Immigration service with all it’s accomplishments is poised to project the nation positively.

The NIS ACG said,” We don’t have scarcity of passport booklets, touts are very smart and in order to collect money from unsuspecting victims,bthey say there is passport scarcity that is why the Comptroller General have been telling applicants not to patronise touts but to fill their forms and documents themselves.

” Ensure that they have the documents completed before coming to passport office but when as applicants you don’t have completed forms yours will have a field day on you. We have our process if you ask some people talking about how much they pay on the passports please ask them what the process they used was.”

” NIS has improved technology to eliminate human interface. Majority of Nigerians are not IT compliant and so most times they want to interface with people to fill the form but we have help desk and servicom of immigration they can approach when they need instead of going to touts.”

Nigerianflightdeck is an online news and magazine platform reporting business stories with a bias for aviation and travel. It is borne out of the intention to inform, educate as well as alter perceptions with balanced reportage.
Previous Aviation Minister announces BASA ratification with USA, three other countries
Next Emirates may get clearance soon as UAE to begin issuing visas October 8