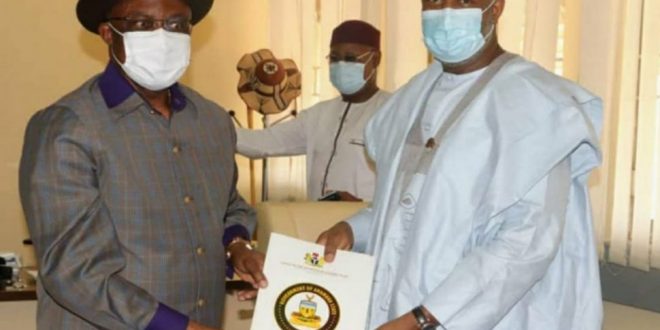 MINISTER of Aviation Senator Hadi Sirika has announced that Nigeria has signed the instruments of ratification of the Bilateral Air Service Agreement (BASA) with the United States of America, India, Morocco and Rwanda.

This is just as he has commended the Anambra State government for embarking on a cargo airport project that will positively impact on the economic development of the state and the South East region as a whole.

Sirika today announced the ratification of the BASA on his Twitter handle staying that:

“I am glad to announce that Mr President, on behalf of Nigeria, has signed the instruments of ratification of the bilateral air service agreement between Nigeria and USA, India, Morocco as well as Rwanda.”

On the Anambra Cargo airport, the minister had received the Governor of Anambra State, Chief Willie Obiano in his office, stating that the Federal Ministry of Aviation and its agencies will always give the necessary guide and cooperation to states embarking on such projects in order to ensure that all internationally set standards are met.

According to Sirika, in a statement made available by Director, Public Affairs, Ministry of Aviation, James Odaudu, airports can be viable if they are built with specific objectives in mind and expressed the belief that the Anambra airport will be successful in serving the interests of the trading population of the state and environs.

He advised the Governor to sustain the ongoing collaboration with the regulatory authorities to ensure that all regulations and guidelines for the construction and operation of airports are met.

Earlier, Governor Willie Obiano had said that Anambra International Cargo Airport, located at Umueri will be ready for commissioning in April 2021 and that the state would be honoured to have him perform the task.

“We are sure of the date because we have the money to compete it. We are not asking for any assistance, neither are we taking any loans. I am here personally to brief you on the project and to invite you to commission it for us in April 2021”

Obiano told the Minister that the decision to embark on the airport project was informed by the need to cater for the economic interests of the state and its environs.

The airport, he said, has the second longest runway in the country, after the Murtala Muhammed Airport in Lagos, built with the best available materials, with a guaranteed lifespan of 100 years.

“The airport is just a few kilometres from Onitsha town, the economic nerve centre of the south east region. It is strategically located and is a worthwhile investment.”

According to the Governor, the construction of the airport has been guided by recommendations and guidelines of the Nigerian Civil Aviation Authority (NCAA) as it hopes to meet the best international standards.

Nigerianflightdeck is an online news and magazine platform reporting business stories with a bias for aviation and travel. It is borne out of the intention to inform, educate as well as alter perceptions with balanced reportage.
Previous House of Reps holds public hearing, begins review process of Civil Aviation Act
Next NIS advises applicants to embrace technology, shun touts