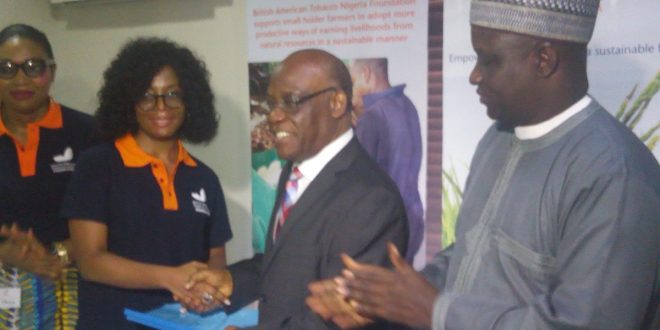 Executive Director of BATNF, Mrs. Oluaseyi Ashade, in a handshake with Dr Anthony Any forum out going DG NiMet while Prof Sani Mashi, in coming DG applauds the process.

PROFESSOR  Sani Abubakar Mashi, the new Director General of the Nigerian Meteorological Agency (NiMet), has revealed his plans  to turn around the agency through  strategic focus on training, improvement of technology and emphasis workers’ welfare packages.

Prof Mashi who was accompanied by the outgoing DG, Dr Anthony Anuforom gave the hint weekend during a facility tour of Ikeja Airport.

Speaking at the visit, Mashi who confirmed that he was impressed with the amount of development and infrastructural facilities at the agency said he would hit the ground running in three basic areas of the workers’ welfare, including salaries, training and retraining.

Prof Mashi, a former Deputy Vice Chancellor (Admin) of University of Abuja believes strongly that, once the workers are happy, the agency will be catapulted to a world-class standard.

According to him, during his tenure, the agency will be mindful of what eventually goes to staff on monthly basis, especially this time of dwindling economic condition.

” I will do whatever is possible within the limits of the law to get something added or introduced to whatever they take home, and then the entitlement that go to them, from time to time that they need to have to encourage them to work, for instance, shift, duty and hazard allowances because like you know, we work on equipment, we work on very difficult times of the day”, Mashi said.

Speaking further, the Nimet boss said that there are some levels of allowances that are there and needs to be introduced, adding that “these are areas that I would need to bring. And then there is the issue of training and retraining, I would want to make sure that these things are introduced very well. Even though there is embargo by the federal government on international training because of the situation of the country, nonetheless that cannot stop us, in exceptional circumstances, we will try to make case to the government so that they will give us a little window because of the essential services we are rendering, if it means bringing in people from outside to come and train them”

“I will make sure they are well-trained so that they can compete with other meteorologist from anywhere in the world. These are the three areas, which I believe if we improve it will go a long way in raising the moral of the staff as far as welfare issues are concerned”, Prof Mashi emphasized.

While appreciating the cordial relationship with his predecessor, the NiMet boss hinted that the best way an incoming officer can learn is to understudy the person he is taking over from so that he will hear firsthand from him the challenges that are there, the road blocks that needs to be eliminated, the milestones that are supposed to be achieved and things that need to be done in order to achieve those milestones.

“So honestly am really impressed and I think I would want to advice anybody that will take over an agency like mine in the future, he or she should avail himself of the opportunity which I have availed myself of now of which, I am very  proud of”, Mashi pointed out.

On the issue of equipment, Prof Mashi who was elated for taking over a well grounded agency like NiMet, promised that, even though so much effort have been made by his predecessor, to provide equipment, that he will make sure that the challenges of upgrades, modifications, maintenance and improvements are tackled.

“I will make sure that all those that needs to be maintained are effectively maintained, those that need upgrading are upgraded and those that need new fleets in order to increase the services we are delivering, I will do my best to get them increased within the limits of the resources available to us”, Mashi pledged.

He equally urged all NiMet workers to be of good behaviour and take NiMet as their personal property, stressing that such attitude is the only way to be remembered in the future.

His predecessor,  Dr Anuforom pointed out that the tour was part of the transition process as he would be completing his tenure in a matter of weeks and then  proceed on his disengagement leave by March.

Anuforom who formally introduced the new helmsman urged NiMet workers to offer their total support to Prof Mashi for a successful tenure in the agency.

Meanwhile, on the signed  Memorandum of Understanding (MoU) between Nigerian Meteorological Agency (NIMET) and the British American Tobacco Nigeria Foundation (BATNF),  Dr. Anuforom explained that the services of the agency cut across every sector of the economy, from agriculture to maritime, aviation, oil and gas, tourism and others; although the agency is attached to the aviation industry.

Explaining why he was part of the signing ceremony,  he said he had served two terms of five years and the second tenure ended this year, although, according to the letter of appointment of the new Director General, Professor Sani Abubakar Marshi, he has to understudy the out-going Director General who would proceed for terminal leave on March 25, 2017.

Nigerianflightdeck is an online news and magazine platform reporting business stories with a bias for aviation and travel. It is borne out of the intention to inform, educate as well as alter perceptions with balanced reportage.
Previous Akinkuotu assures of prompt benefit payments to retired NAMA workers
Next Qatar Airways suffered bird strike, not burst tyres on takeoff-NCAA