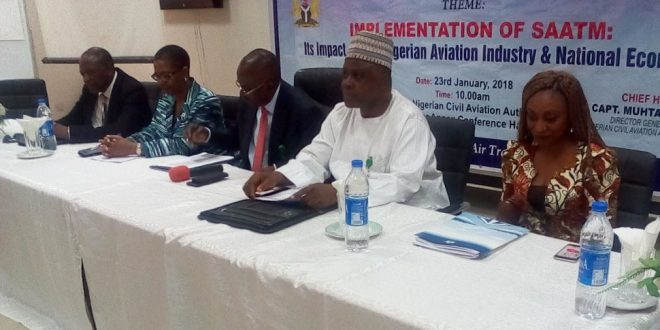 AIRLINE operators this morning declared that they are against the implementation of the Yamoussoukro Declaration (YD) as its implementation, according to them, meant the complete and utter demise of Nigerian airlines especially with the inherent challenges the airline’s face.

This is just as African governments, airlines and other stakeholders have been charged to adopt and implement the Yamoussoukro Declaration (YD) as a means to curb the excessive incursion of mega carriers from Europe and the Middle East especially with the carting away of over 80% of the market from the continent.

These divergent positions were made known at a one-day sensitization workshop on Single African Air Transport Market (SAATM) at the Nigeria Civil Aviation Authority (NCAA) Annex with theme: Implementation of SAATM: Its impact on the Nigerian Aviation Industry and National Economy” where industry regulators urged airlines and government to get onboard with the initiative or risk losing out on the long run.

Setting the tone for the workshop, Chairman Airline Operators of Nigeria (AON), Captain Noggie Meggison said the airline’s were not carried along by the African government as they have went ahead to sign off on the the declaration’s implementation without putting in place facilities to aid domestic airlines to compete.

Meggison questioned if the country was actually ready for the intra-African open skies and what the benefits are especially since the AON feels the playing field is not level and is skewed against Nigerian carriers with regards to how their neighbors tax and charge them.

Chief Executive of WestLink Airline, Captain Ibrahim Mshelia commended the idea of open skies but stated that the airlines needed more preparation to be part of the /and benefit from the the single air transport market.

However, Secretary General of the African Civil Aviation Council (AFCAC), Ms Iyabo Sosina who reacted to the statements of the AON stated that the position of the airline body had not changed in over 20years and respectfully added that the issues the airlines mentioned were purely domestic issues and had nothing to do the the YD.

Ms Iyabo Sosina explained that protectionism of local market share is not the way forward and that Africa needed to open its airspace within the continent.

On benefits she stated the the YD will provide African airlines commercial freedom, wider networks, better aircraft utilization and create a larger market share for the continent and improved access to capital as well as more flexible commercial arrangements such as alliances, codeshares, franchises, interlining, mergers and acquisitions among African carriers.

“As we are aware, the better connected a country is by air, the greater its ability to unlock the economic and social benefits that air transport can deliver through mobility of people and goods to the traveling public, air carriers, airports, other allied service providers, the economy of member states and the continent as a whole.”

Nigerianflightdeck is an online news and magazine platform reporting business stories with a bias for aviation and travel. It is borne out of the intention to inform, educate as well as alter perceptions with balanced reportage.
Previous ICRC sets to resolve concession imbroglio between FAAN,Bi-Courtney
Next Correct anomalies of MMA2 concession, FAAN urges ICRC