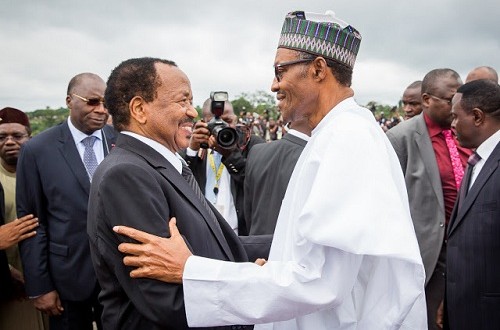 President Muhammadu Buhari having a warm hand shake with his Cameroonian counterpart, President Paul Biya as his arrived the country's capital Abuja for his two day official visit which ended today

President Muhammadu Buhari has declared that it is high time the country went back to the lands to ensure food security as well as to diversify the economy.

President Buhari made this known this afternoon, in a joint Press Conference at the Transcorp Hilton Hotel, Abuja with Cameroonian leader, President Paul Biya who concluded his two-day official visit to Nigeria.

Both leaders  talked about steps taken to ensure a mutually beneficial co-existence between the nations from agriculture and other land-based ideas aimed at diversifying the economy to security and stopping the activities of the insurgents once and for all.

President Buhari who talked on diversifying the Nigerian economy explained how the country derailed from agriculture to use funds from the sector to develop the oil sector and then abandon the agricultural sector to the detriment of the nation today.

He said,” We have to go back to basics and there is no way we can do this without our neighbours. I have discussed with my counterpart and the truth is we in Nigeria, we have to go back to our lands first to secure food security and two to diversify our economy.”

Topping the press briefing today were also issues of security and many clarifications of certain misconceptions nursed in the past by Nigerians as far as the fight against insurgency is concerned.

President Paul Biya who reacted to this area of questioning said there was never a time his country refused to help Nigeria in the fight against Boko Haram and also never a time Cameroon was harbouring terrorists in its territory.

He said although he also heard about the allegation that his country was serving as safe haven for members of the sect after unleashing terror in Nigeria, there was no truth in the report.

According to him, the allegation was just “bad press,” saying his country had nothing to gain by supporting Boko Haram.

He said, “Cameroon was never reluctant in the fight against Boko Haram. Yes, I heard this piece of information. I heard it in New York during conferences that Cameroon serves as a base for Boko Haram.

“It was just a bad press and Cameroon remains focused and committed to the fight against Boko Haram.”

Nigerianflightdeck is an online news and magazine platform reporting business stories with a bias for aviation and travel. It is borne out of the intention to inform, educate as well as alter perceptions with balanced reportage.
Previous Aeronautic engineers charge govt to replenish ageing workforce
Next Nahcoaviance cough out N100m to avoid FIRS shutdown over tax default