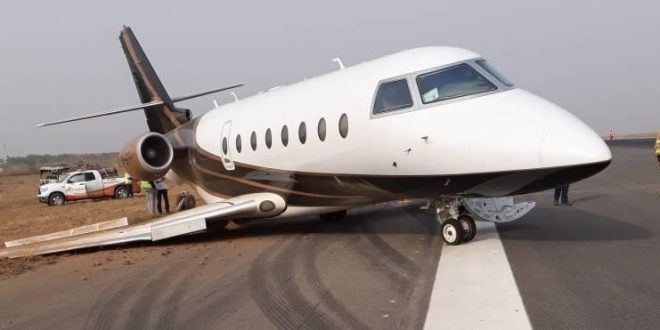 A private aircraft operated by Nest Oil has just skidded off the runway of the Nnamdi Azikiwe International Airport, Abuja causing the Federal Airports Authority of Nigeria (FAAN) to close the airport for 30 minutes.

The airport authority while making the closure known notified passengers and airport users that the runway would be closed.

According to the authority, the closure is to enable the it take safety precautions, as a private jet being operated by Nest Oil has just skidded off the Abuja runway.

The statement signed by General Manager Corporate Affairs FAAN, Mrs. Henrietta Yakubu, the aircraft lost its landing gear in the process but all hands are on deck to put the situation under control stating normalcy would be restored within the hour.

Nigerianflightdeck is an online news and magazine platform reporting business stories with a bias for aviation and travel. It is borne out of the intention to inform, educate as well as alter perceptions with balanced reportage.
Previous AON appeals to FG on ‘unfair’ implementation of single African skies
Next ART President backs AON’s position on Single African Sky