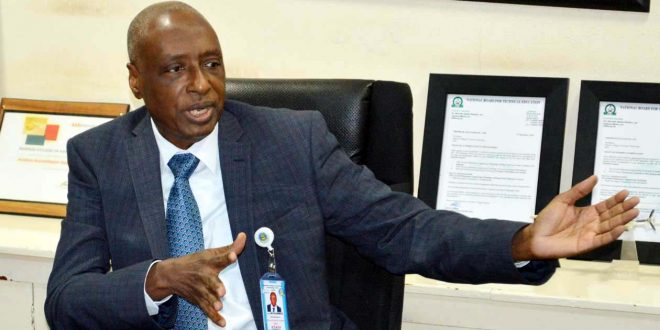 AS part of planned efforts to stem capital flight ensuing from training of firefighters, Rector, Nigeria College of Aviation Technology ( NCAT), Captain Abdulsalami Mohammed has said that an automatic fire simulator is currently being built in the United Kingdom to be housed at the college.

This is just as he expressed hope that the new Boeing 737GN simulator the college is acquiring would be installed this year as all the requirements set to install it have been approved and already in the works.

NCAT Rector who was speaking at a press conference detailing improvements at the school also said that the school currently has eight serviceable aircraft with approval from government to acquire 20 diamond aircraft for training.

Abdulsalami who spoke on the need for an automatic fire simulator said apart from the economics, all the region put together may not have as many fire fighters as Nigeria and thus the need to have the simulator.

“We have another simulator that is being installed in Zaria for this year. The simulator is for firemen. It is automatic fire simulator. As you may be aware, we have never had fire simulator in Nigeria in spite of the number of firemen that we have in this country, all these years, we have been sending our firemen to Cameroon for training. So, this administration felt it is more economical for us to have our own simulator here in Nigeria and this decision was taken to house it here because we have the land. The simulator is being built in the United Kingdom.”

“As you know, the Federal Airports Authority of Nigeria (FAAN) has gotten firemen in every airport and you can imagine the number of firemen that require training and retraining. We also expect people from the Federal Fire Service to make use of this simulator. We also intend to incorporate some of our cabin crew training into the use of this simulator because you can simulate cabin fire, cabin smoke, lavatory smoke and the likes with this equipment. So, it is very ideal for us to have it here in Zaria.”

On the Boeing 737NG simulator, Captain Abdulsalami confirmed that the simulator will be installed in Zaria but part of the delay was due to the simulator housing as the initial contract did not include that.

He explained, “The contract was for acquisition and installation of Boeing 737GN simulator. So, we looked at our existing facilities if they were adequate to house the simulator, but the simulator manufacturer after seeing the dimension, said the building was inadequate. So, we have to now start the process from the scratch; we had to get consultants, get the plan approved by the manufacturer before we could go forward. We had to go to the Federal Executive Council (FEC) for the contract to be awarded. It was only last year that we got FEC approval for the building. We have awarded the contract and it is our belief that the building would be completed and the simulator would be installed this year.”

He also gave clarifications as to why the simulator is still yet to arrive, stating that like an aircraft, harsh environmental conditions will affect it,”The simulator has been constructed, but it is there waiting for shipment; it is too big to enter a container. So, when they bring it in the counter, they won’t be able to cover it. So, if they bring it in and the building is not ready, it would be exposed to the elements and that is why the manufacturer advised us not to expose it until the building is ready. This simulator is very sensitive to temperature and humidity and all the parts were made by Boeing. We believe that the simulator would be would be installed this year.”

On number of aircraft on ground for training and the college’s planned acquisition Captain Abdulsalami said the school currently has eight (8) serviceable aircraft but explained they were not all the same.

According to him, there are the aircraft for basic training, advanced training and the two engine aircraft all dependent on the stage of the student’s training.

“As of today, we have eight aircraft that are serviceable. These aircraft are not the same, we have the basic, advance and two engines ones. So, depending on the stage of training of students, some of the aircraft that are serviceable may not be useful to students for instance who are starting afresh that need the basic and less complex aircraft and then they advance to more complete aircraft, with more instrument flying, before they now go into the multi-engine aircraft,” he said.

“Sometimes, when you start with the new students, the multi-engine aircraft is actually parked and not doing anything until the students reach that time where they can now start multi-engine training. During that period, we use that for our instructors to maintain their proficiency. We encourage them to fly such aircraft.”

He also said that the college has approval from the government is to acquire 20 Diamond aircraft; five of which are the two engines DA42 and 15 Assembly engine DA 40 aircraft.

“When I assumed office in 2017, we took delivery of one DA 42 aircraft in the April of 2017. The college placed orders for additional aircraft, but we were informed by the contractors that the Diamond Aircraft Company was bought over by another company and that new owner decided to relocate the production place from Austria to Canada and they told us that they won’t be able to produce another aircraft until nine to 10 months, which is when the assembly line would have been completely relocated.”

Nigerianflightdeck is an online news and magazine platform reporting business stories with a bias for aviation and travel. It is borne out of the intention to inform, educate as well as alter perceptions with balanced reportage.
Previous NCAT Rector calls for professional reportage as LAAC training kicks off
Next Mshelia, ZLP candidate, kicks off campaign in Borno promises to return dignity of state