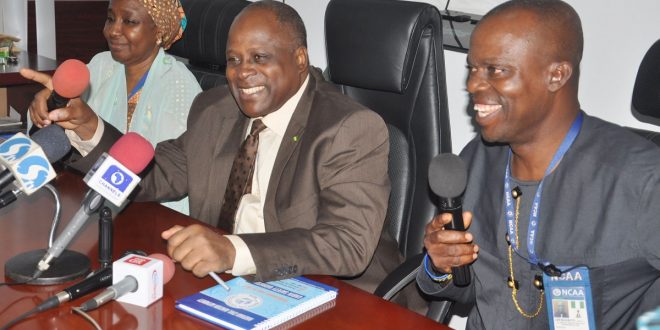 IT is indeed no news that a team of the United States Federal Aviation Administration (US-FAA) under the International Aviation Safety Assessment (IASA) program have come and spent one week auditing the country’s aviation industry especially, its Civil Aviation Authority in a bid to ensure the nation has all it takes for its carriers to continue flying into the United States safely adhering to all standards and international norms.

Certainly, it is no longer far-fetched that the country did extremely well during the week-long audit and is now poised to retain its status as a Category One nation through the hard work of the Nigerian Civil Aviation Authority and all those who aided in the success of the audit.

However, there are still some ways to go as the audit team may have scored the CAA very high on every aspect of the audit they embarked on but they are some areas that are open that the CAA will have to work on and close in the next 30 days but despite that, it is very likely that the category one Status has been retained and only an official announcement remains.

The argument is that the open items will in no way affect the already high scores the NCAA has on its audit but will only improve and add more credence to the audit having closed open items.

This certification has become important in the country’s aviation sub-sector especially as some of its airlines plan to venture into the United States as part of the Open Skies agreement the nation signed with America.

The audit has become integral in accessing and evaluating the Nigerian aviation industry and since its attainment in August 24, 2010 as announced by the United States Ambassador to Nigeria, Dr Robin Renee Sanders and its retention in 2014, it has become a big deal to ensure that the country keeps its status especially as some West African countries have started losing theirs as this will help in drawing flights from the country to the United States.

The NCAA before the full audit commenced, carried out a ‘Dry Run’ on one of the Nigerian carriers, Med-view Airline. The Dry Run is akin to a mock exercise on the carrier of which Nigerianflightdeck.com learnt that the airline’s performance was okay and being a carrier that may venture into the United States, the mock exercise on Med-view was apt and welcome to both CAA and airline.

Last Monday, the main assessment began as the four-member team from the FAA have arrived Nigeria to conduct the audit which took place from 21st – 25th August, 2017.

The members of the team are Team leader, Louis A. Alvarez, Operation specialist, L.P.Vanstory; Airworthiness Specialist, Benjamin Garrido, and Attorney Jeffrey Klang and all arrived the country to assess the State’s aviation law, regulations and oversight capability in accordance with the eight critical elements as defined in ICAO 9734.

In addition, during the assessment, the team will need to visit the facilities of an Airline Operators Certificate (AOC) holder. They will look at the operations and maintenance organisations.

It also means Nigeria now has the laws and regulations necessary to oversee air carriers in accordance with ICAO rules.

The Director General of the Nigeria Civil Aviation Authority (NCAA), Captain Mukhar Usman who played host to the auditors before the commencement of the audit expressed optimism that the country would once again scale the hurdle, stressing that the regulatory agency was prepared to retain the Category One Status it attained in 2010.
He said, “We got FAA Category 1 in 2010,retained it in 2014.We hope that with the efforts we have put in ,we would be able to retain it this time around.”

The NCAA boss added that during the audit, the FAA team will visit one of the airlines at the instance of audit team.
He explained that the FAA team would focus its audit on Personnel Licensing, International Operations and Airworthiness, which he assured that the agency was fully prepared for.

He stressed that the FAA team would be in the country for the next five days after which they would make their observations known through a report that would be sent to the authority after the exercise.

He said: “NCAA has done a lot in the areas that we are expected to cover and not only for this audit, in our statutory responsibilities; safety, aviation security and also regulations. We have the new civil aviation bill, which is on its way to the National Assembly. The bill is to enhance the current Act of 2006 and it’s supposed to be in line with the new annexes of the International Civil Aviation Organisation (ICAO) Convention. We also amended our regulation, which is 2015 Civil Aviation Regulation.

“Re-organisation has also been going on to make sure the organisation continues to discharge its responsibilities as it should be, which is to be in line with ICAO. We want to continue to attract and retain qualified personnel in the industry in sufficient numbers to make sure we carry out the safety as required by ICAO.

“In the area of enforcement and compliance, we have done a lot. We make sure that our regulations, which are mainly safety, are enforced. Our sanctions are not supposed to be punitive, but corrective. We have been sanctioning where we need to sanction in order to correct and instill safety in the system and even security. We thank God in the last two years we never had any major accident. There is zero tolerance in accident at NCAA.”

Benefits:
The benefits of the IASA Audit to Nigeria and Nigerian operators are numerous as prior the certification, operators from this part of the world leased aircraft at much higher rate and paid heavily for insurance even when the airplane in question is a brand new one.

Countries with Cat 1 are regarded as those with good safety standards and enjoy lots of benefits including lower insurance premium, cheaper aircraft leasing and automatically joining the big league in aviation. Before, Nigeria was in Cat 2 and as such regarded as one of the high risk countries by international aircraft lessors and insurance firms.

Many operators have urged the government to do all it can to retain the status as many who have procured aircraft stressed that company like Boeing prior CAT 1 attainment insisted that they pay higher insurance premium which is an extra commercial burden to their company. With the Category One now, Nigerian registered airplanes can fly directly to US cities under the Opens Skies Agreement (OSA) between both nations.

According to information from the US-FAA, each country, under the International Convention on Civil Aviation (Chicago Convention), is responsible for the safety oversight of its own air carriers. Other countries can only conduct specific surveillance activities, principally involving inspection of required documents and the physical condition of aircraft.

The US-FAA conducts the International Aviation Safety Assessment Program (IASA), assessing the Civil Aviation Authority (CAA) of each country that has carriers operating to the United States. Because of the provisions of the Chicago Convention and national sovereignty, FAA is not permitted to evaluate a foreign carrier within its own sovereign state.

An IASA assessment determines if the foreign CAA provides oversight to its carriers that operate to the United States according to international standards. The International Civil Aviation Organization (ICAO), a United Nations agency, and Annexes 1, 6, and 8 of the Chicago Convention developed those standards.

So long as the CAA meets standards, FAA gives that authority a Category 1 rating and that means the air carriers from the assessed state may initiate or continue service to the United States in a normal manner and take part in reciprocal code-share arrangements with U.S. carriers.

However, if the CAA does not meet standards, FAA gives that CAA a Category 2 rating. Category 2 means the air carriers from the assessed state cannot initiate new service and are restricted to current levels of any existing service to the United States while corrective actions are underway.

The US-FAA does not support reciprocal code-share arrangements between air carriers for the assessed state and U.S. carriers when the CAA has been rated Category 2.

During this time, the foreign air carrier serving the United States is subject to additional inspections at U.S. airports. Painfully, Nigeria has been in the Category 2 rating for scores of years, a situation aviation experts describe as shameful considering the length of years the country has been involved in aviation business.

An operator who once plied the Lagos- US route stated that, ‘Using Nigerian pilots and crews will save us a lot of money. Operating with Hi-Fly is an expensive venture but we were left with no option because there was no Cat 1. More so, we had to commence the Lagos-New York service at the time we did because we didn’t want to lose our slots. But with Cat 1 on stream, the game will change for better’, he stated.

Nigerianflightdeck is an online news and magazine platform reporting business stories with a bias for aviation and travel. It is borne out of the intention to inform, educate as well as alter perceptions with balanced reportage.
Previous Elumelu, UBA Group Chairman, donates $500,000 to Sierra Leone mudslide victims
Next Otunba Runsewe to open Jollof Rice chef challenge at Akwaaba African Travel Market