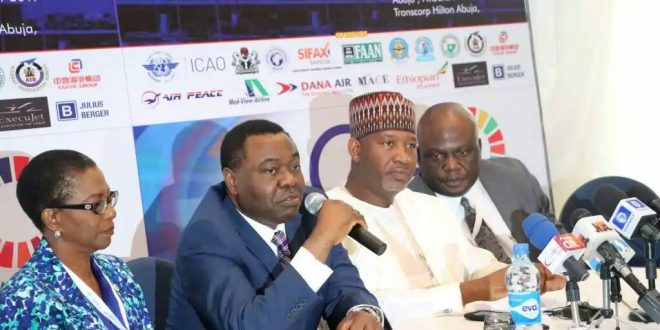 MINISTER of State Aviation, Senator Hadi Sirika yesterday clarified that the proposed National carrier in the works is going to private sector driven but that government will own between 3-5% equity in the airline.

He made this known at a press conference in the ongoing ICAO World Aviation Forum (IWAF) 2017, where he explained that government went through a series of national carrier ideas starting with Virgin but it failed because it was not thoroughly thought out and planned.

According to Senator Sirika, the national carrier idea was one he took over from the president, Muhammadu Buhari who had already put in place a National carrier committee and all he is doing is fine-tuning and executing.

” The national carrier was there before I became minister and I am just driving an already established idea and bringing it to fruition. And like we always said, the national carrier is going to be private sector driven but that doesn’t mean it will be entirely owned privately as that is a misconception. Government is going to own at least three to five per cent equity and that is the plan so, it’s a national carrier not a private airline.”

On various criticisms stemming from the multiple designations granted airlines and of recent Ethiopian Airline, which operates to five of the country’s international airports, Sirika explained that he was trying to ensure that Nigeria was not left behind when Africa airspace is totally liberalised.

He said it was a good move that would benefit the nation in the long run especially as the big picture is clear.

On policy somersaults that have been a bane all sectors on the nations economic life, Sirika stated that this government has not turned around policies in the industry but has strategically thought them out to improve them.

” I will not talk about what our predecessors did, they had their plan which they were executing the way they saw fit, we have not jettisoned those plans we have only made them better and will continue to do so. We are a social Democratic Party and so what we do is people-oriented which is why our approach to some of the policies we were handed is different,” he explained.

Nigerianflightdeck is an online news and magazine platform reporting business stories with a bias for aviation and travel. It is borne out of the intention to inform, educate as well as alter perceptions with balanced reportage.
Previous Dana Air resumes flights apologizes for unions’ disruption
Next NCAT ICAO RTCE Status to boost school’s training capacity, revenue- Captain Mohammed