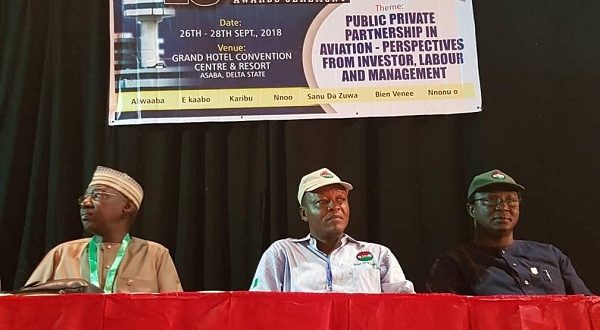 GOVERNORSHIP Aspirant in Borno State under the Labour Party and Chief Executive of WestLink Airlines, Captain Ibrahim Mshelia, has said Public Private Partnership (PPP), if handled transparently is a lofty idea and would help the nation as a whole improve on the current infrastructure deficit it faces.

Mshelia who is chairman at the National Union of Air a Transport Employees (NUATE) 10th Quadrennial National Delegates Conference holding in Asaba Delta State made this known when he gave the opening address.

The aspirant however said the concept is not catching on in Nigeria due largely to shoddy and lopsided agreements that have stalled the development of the arrangement from the controversies that bedeviled Maevis to the one generated in the Bi-Courtney agreement.

Mshelia said, “On the surface, this is a very lofty idea. If done transparently, we all should encourage it because that is the modern practice in all fast growing economies across the world. ”

“However, the PPP seems not to be walking on the fast lane in the Nigerian aviation sector. This is largely due to shoddy and lopsided packages that oftentimes constitute grave and lethal therapy for the growth of the sector. ”

“Examples fresh in our minds today are the controversies that bedeviled the Maevis and Bicortney contracts. There is no gain saying that the sector can only succeed in the drive towards PPP when we have a government that is answerable to the people in place. ”

According to him, a Public Private Partnership (PPP) arrangement involves the private sector in aspects of the provision of infrastructure assets and or Services, new or existing that have traditionally been provided by the government.

Stating that through such private engagements, governments broaden their options for delivering better services to its people and increase the economic multiplier effects while the private sector provides finance and expertise to ease fiscal constraints and increase efficiency .

He further called on the unions to begin marking out plans to make their umbrella party, the Labour Party (LP) great by working to install a responsive, responsible, intellectual and worker friendly government, stating that’s why he entered the fray for Borno State Governorship.

He said,”The upcoming election is around the corner. We need to begin to mark out plans and back them with actions to ensure we grow our own party, The Labour Party (LP), to relevance, so that through that platform we can install a government that will be responsive, responsible and workers friendly. ”

“Sequel to this drive, I want to implore that as we are looking unto NUATE to turn out a new set of leaders to pilot the affairs of the aviation workers for another four years from this assembly, we must not also loose focus on the ultimate goal of installing our own government and marshal our programs towards that target.”

“Some of us have already begun the move by taking the bold step to creating the change that we all desire. I am happy to inform you, as my first constituency, that I will be contesting to be the Executive Governor of Borno State under our party, the Labour Party come 2019.”

“I greet all of you here with the message of hope, optimism and change that can be brought about by purposeful and focused leadership. That is what you and I are offering to our nation. I have this strong conviction that the Nigerian workers have all it takes to drive the country away from this track of perdition.”

Nigerianflightdeck is an online news and magazine platform reporting business stories with a bias for aviation and travel. It is borne out of the intention to inform, educate as well as alter perceptions with balanced reportage.
Previous NCAA de-registers 10 aircraft, issues 115 air worthiness certificates in 6 months
Next NLC President Waba call for probe on N120bn aviation intervention fund