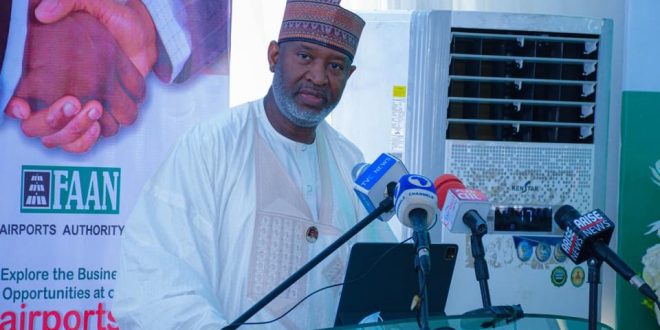 THE planned suspension of operations by some airlines from tomorrow Monday, 9th May, 2022 was dealt a severe blow with more airlines including Overland Airways and Arik Air joining Ibom Air and Dana Air to announce that they will not be suspending operations.

As it stands Azman Air, Air Peace, Max Air, Aero Contractors and United Nigeria are all that’s left of the planned suspension by the Airline Operators of Nigeria ( AON)

Overland Airways in a statement signed by Mrs C. M Mohammed for Management
said it has been inundated with enquiries about flight services on Monday 09 May, 2022, following the public statement issued by AON Executive, on Friday 06 May, 2022 and gave some clarifications.

The airline in the statement said,”Overland Airways acknowledges the existential threat that these runaway fuel price increases pose for the Air transport industry in Nigeria. However we do not believe that Airlines volunteering to stop operations is the solution.

“Overland Airways has Commercial and Legal obligations to customers, financiers and staff, promise of which must be honoured.

“Overland Airways believes it is the responsibility of Government to address the inequity behind the Aviation fuel supply chain and we join the AON to call on Government urgent action as a duty of State.

The airline stressed that it will continue to provide full service to its customers and general public with normal operations on Monday 09 May 2022 and beyond.

However said,”The above notwithstanding, we identify very strongly with our AON and will participate actively in every dialogue to resolve this national emergency as soon as possible in the interest of our country.

Ministry of Aviation In a statement made available by
Special Assistant to the Honourable Minister of Aviation on Public Affairs, James Odaudu also hinted that Arik Air has also shelved its plans to withdraw services and has hailed the airlines as patriots who have continued to bear the brunt of an unfavourable oil market

The Ministry said,” Since members of the Airline Operators of Nigeria (AON) issued notice of withdrawal of flight services as a result of rising cost of Jet A1 (Aviation fuel), and in spite of the initial statement by the Ministry, enquiries have continued to flood in with some under the erroneous impression that the withdrawal was a kind of strike against the government.

“We wish to state that the decision of the Association is purely a business one as they are private businesses reacting to market forces but appealing for interventions to enable them carry on with their operations.

“It is gratifying that members of the Association have started reviewing the decision to withdraw flight services, with Ibom Air Green Africa Airlines, Arik Air, Dana and others confirming that they will carry on with their normal flight schedules. We hope that other members will consider the expected impact on businesses and individuals and review their decision.

“We also wish to assure foreign airlines operating in the country that all logistics and services for their operations remain in place as usual and that no disruptions whatsoever should be envisaged.

As a government, we reiterate our commitment to the continued growth of the aviation industry where airlines and other service providers operate in a profitable and competitive environment.

Speaking on the issue President Aviation Safety Round Table Initiative ( ART), Dr. Gabriel Olowo predicted that the airlines will not shut down as it is un-Nigerian but charged government to find a lasting solution to the over two decade old issue.

He said, “AON may not shut down because Its un-Nigerian to cooperate , collaborate and or consolidate for common course such as this, hence we wouldn’t be at this stage.

“Aviation Fuel has been an issue for upwards of 20 years in Nigeria without serious attention. Yet airlines keep operating out of being patriotic.

“Regrettably this is planning for an accident”.Please heed the voice of the watchman. God forbid. This has been the essence of my consistent advocacy for upward review of tariffs all the time. But how high can tariff go given the average passenger purchasing power? He asked.

“If any airline pretends about this problem , such airline must be receiving subsidies for the business or “cutting corners”. No operational and management skill can answer for this uncontrollable factor of the business.

“My take. Govt must provide a lasting solution once and for all at this time. While I also appeal to the airlines to heed the Minister’s appeal to endure and stretch a little more but not beyond their elastic limit. He said.

Nigerianflightdeck is an online news and magazine platform reporting business stories with a bias for aviation and travel. It is borne out of the intention to inform, educate as well as alter perceptions with balanced reportage.
Previous Dana Air pulls out of AON flight suspension, to continue operations
Next Flight withdrawal called off as AON suspends action