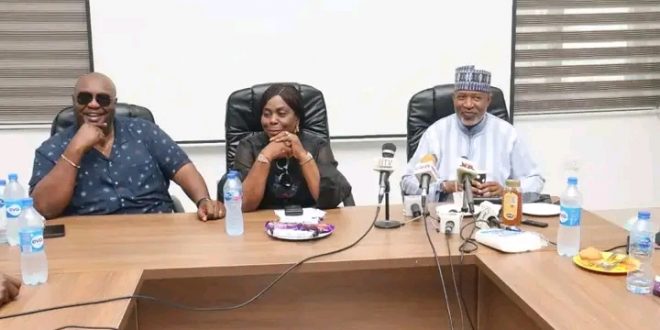 The Minister of Aviation, Senator Hadi Sirika has assured the National Assembly joint committees on aviation of the completion of the N92 billion second Abuja International Airport Runway before the exit of the current regime.

Sirika gave the assurance on Thursday during an oversight visit to the airport by the joint committees of the Senate and House of Representatives led by Senator Abiodun Olujimi and Honourable Nnolim Nnaji.

The Minister who conducted members of the committees of the two Chambers of the National Assembly round the on going projects at the Nnamdi Azikiwe International Airport disclosed that the contractor for the second runway, Chinese Civil Engineering Construction Company, (CCECC) had been fully mobilised.

Although the ministry of Aviation has put the runway construction at N72bn recently, recall that Federal Executive Council (FEC) approved the sum of N92.12billion for the construction of a second runway at the Nnamdi Azikiwe International Airport, Abuja which was revealed by Minister of Aviation, Senator Hadi Sirika on March 23, 2022. Second Abuja Airport Runway: FEC approves N92.12bn for project

He explained that the approved fund will be spread over a number of works to be carried out at the airport within a period of 12 months.

Both chairmen stressed that the construction of the second Abuja Airport’s runway was long overdue considering the strategic importance of the airport to the nation.

Honourable Nnaji who sought the commitment of the contractor that the project would be completed on schedule observed that Abuja being the adminstrative capital of Nigeria coupled with its growing economy could no longer cope with a single airport runway.

The CCECC project manager, Yang Yantao in responding to Honourable Nnaji’s demand for assurance that the runway would be on stream on schedule stressed that with proper funding, the CCECC would deliver the runway and all the components in six months.

Senator Sirika had earlier in his remarks applauded the Senate and House of Representatives Committees on Aviation for their continued supports to the aviation sector.

He said,“Government is committed to this project as well as funding it. With maximum support from the National Assembly in their oversight functions and funding we are more than ready at any time”.

The chairman Senate Committee on Aviation, Sen. Biodun Olujimi, expressed her satisfaction with the ongoing project.

“This is happening in our time. We are improving and getting better and taking aviation as the real growth of transportation and key to whatever, we have to do for the growing aviation sector in the country.

“We believe that at the end of it all funding will be available to those projects that you need to deliver and we expect that you deliver them as well as you can.”Olujimi recalled that at a particular time the airport has to be shut down because “we have only one runway and it was bad. It was the initiative of the minister to ensure that the construction of the second runway began”.

The chairman of, the House Committee on Aviation, Hon. Nnaji Nnolim stressed that the construction has been expected to begin for some years.

“We have been funding budgets to accommodate the second runway which is very important to this country. Abuja, being the capital of Nigeria, is an aggressive infrastructure, agricultural development and economic base, we feel that it is important to add another runway.

“When completed, this runway will be the longest, maybe in West Africa – being 4.2 kilometres against the existing runway which is about 3.7 kilometres. This runway is coming with control power, a taxiway and other facilities.

The legislators equally inspected the airport’s cargo terminal and the multi story car park both of which were at the advance stages of completion before departing back to the National Assembly.

Nigerianflightdeck is an online news and magazine platform reporting business stories with a bias for aviation and travel. It is borne out of the intention to inform, educate as well as alter perceptions with balanced reportage.
Previous Again, Emirates Airlines suspends flights to Nigeria over trapped funds
Next NIS cleans stable, dismisses 8 personnel, sanctions 18 others