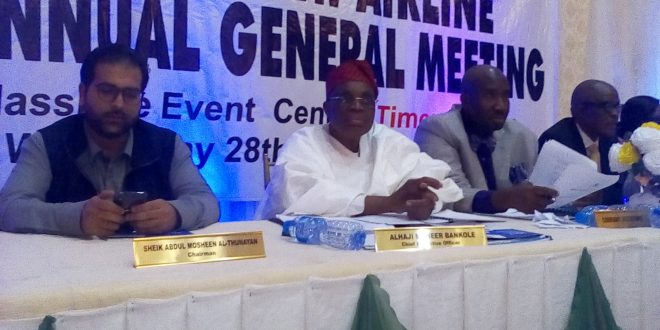 SHAREHOLDERS of Med-view Airlines have commended the airline’s 2017 performance indices urging the airline to keep it positive after it announced an increase in revenue of N36.91 billion in the end of December 2017.

This is however as they have enjoined the government to aid the aviation industry by reducing what they described as an over-taxed airline section of the industry calling for palliatives to help airline’s grow.

Reeling out the figures, the Chief Executive Officer of Med-view Airline, Alhaji Muneer Bankole said that the company is firmly on the path of improved performance, sustained growth, profitability and adequate returns to all stakeholders within the shortest possible period.

However, the shareholders said government can make operating cost bearable for airlines, urging government to start some form of tax reduction or rebate to encourage local carriers like Med-view and enable them compete.

A shareholder, Mr. Godwin Ede who spoke pointed out that Med-view’s five-year plan was progressive and augurs well for the airline and the shareholders but that the airline had huge operating costs most bordering on taxes, he said government must, in a bid to save the airline’s from going down, reduce the airline’s costs.

Another shareholder, Owolabi Peters said the infrastructure to make operations smooth was not there and stated that all that needs to be put in place for domestic airlines like med-view were not there.

The Med-view airline CEO, who concurred with Ede’s argument used the cost of Jet A1, as an example, comparing what obtains in Nigeria and other parts of the world.

“In Saudi Arabia fuel to airline’s is 20cents and in Dubai government has fully subsidised fuel but here in Nigeria we buy fuel in Yolafor N265 per litre while we purchase for N235 in Abuja. Fuel in operational cost is over N10.5billion and so here do we go from there,” Bankole lamented.

Bankole however on the upside said despite the challenges of 2017 Med-view was in the process of acquiring a Boeing 777-200ER of its own stating that it would but be leased but bought outright as part of its fleet expansion plans to meet with its growing route network.

The airline shareholders also ratified the appointment of four new members of the board who were appointed on February
19, 2018.

Nigerianflightdeck is an online news and magazine platform reporting business stories with a bias for aviation and travel. It is borne out of the intention to inform, educate as well as alter perceptions with balanced reportage.
Previous Delta links financial capital of Nigeria, Lagos with the New York, United States
Next Presidential visit: commuters face untold hardship as airlines delay flights to accommodate passengers