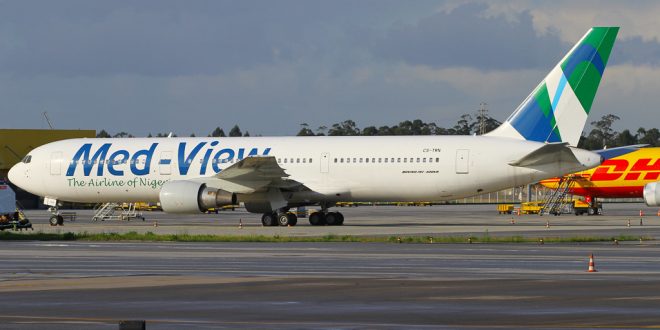 Med-View set to return to operations November, aircraft due to return from checks

NigerianFlightDeck 31st October 2019 Aviation News Comments Off on Med-View set to return to operations November, aircraft due to return from checks 101 Views

MED-VIEW Airline may be returning to operations as soon as November if the indicators are anything to go by as the airline which temporarily suspended flight operations.

Chief Operating Officer (COO), Mr. Michael Ajigbotoso, gave this hint when he told journalists in Lagos that some of its aircraft which were flown out for maintenance will be returning to the country soon.

Ajigbotoso told aviation correspondents in Lagos that the airline had to temporarily suspended operations due to lack of equipment, but assured that the management had perfected plans to return to some of its old routes in the country.

He also declared that the airline, which remains the only carrier on the Nigeria Stock Exchange (NSE) was in compliance with the Nigeria Civil Aviation Regulations (Nig.CARs) 9.1.1.12 (A), stressing that the Nigerian Civil Aviation Authority (NCAA) was aware of its current status.

The COO emphasized that some of its aircraft, which went for maintenance checks would return to service very soon.

He insisted that the airline would return to service stronger despite the recent challenge in operations, assuring that safety and comfort of its passengers are still paramount to its operations.

He also commended the staff of the organization for their commitment and sustained belief in the airline despite the recent operational challenges.

He further commended the staff and committed clients would stand by it in this period, stressing that the airline would not fail them.

He said: “We appreciate the staff for their commitment in spite of the little operational challenges, which we believe are the hallmark of any business. Businesses have their high and low moments and I can tell you we are surmounting the challenges. We are coming back soon bigger and better.

“Also, to our numerous customers, we want to tell you that the best is yet to come. We have done it before, making the nation proud at the domestic, regional and international fronts. We have been consistent with our hajj operations in the past 14 years. We remain the only carrier to have done that successfully.

“We want to assure you that as soon as our aircraft return from the scheduled maintenance, we will begin to provide the excellent and safe flight services, which we are known for and maintained since the commencement of our operations.”

Nigerianflightdeck is an online news and magazine platform reporting business stories with a bias for aviation and travel. It is borne out of the intention to inform, educate as well as alter perceptions with balanced reportage.
Previous Boeing grounds at least 50 737NG jetliners worldwide due to cracks
Next BASL honours staff who returns passengers’ lost items