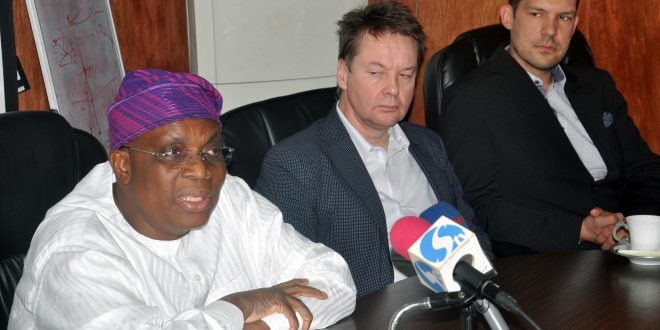 MED-VIEW Airline has announced a suspension to its Lagos- Dubai operations till March 24th 2018 to complete the aircraft’s refurbishment.

This is just as it has declared today that it is in no way indebted to the Gatwick Airport Authorities nor is it in any debt to its European handlers, Mendez.

Managing Director of Med-view, Alhaji Muneer Bankole who disclosed this at the airline’s corporate headquarters in Lagos was reacting to allegations that it was due to debts that its operations in the last few days have been hindered causing its passengers challenges.

While explaining some of the challenges the airline faced of no fault of its, he explained that due to the refurbishment of its aircraft on the route, it will have to suspend the Dubai service .

He said, “consequently, we have taken measures on out Lagos-London route, which will now be serviced by an alternative aircraft currently in operation. We will also maintain three weekly flights. We have shut down Dubai operations till March when our aircraft B767-300ER Christened ‘ABEKE’ returns from complete refurbishment in the United Kingdom. Passengers who have booked with us will be flown to their destinations via interline agreements.”

On the alleged indebtedness, Bankole who explained the situation said that it has paid the Gatwick Authority £1.45million as at today and that it can be verified.

According to him, the airport authority asks for money upfront for services not rendered, stating that Med-view was paying for future operations which is not the same anywhere.

The airline however apologized to its passengers for the challenges it has faced, thanking them for their support, understanding and patronage in the period.

Bankole also stated that it had serious challenges with its European partners over aircraft leased stating that it had not met the airline’s requirement in providing the necessary capacity.

He stated, “while we want to leave the past behind us, it is imperative to say that we have issues with our European partners over aircraft we leased from the . From all indications, this aircraft has not been able to meet our requirement in providing the necessary capacity. The United Kingdom Civil Aviation Authority (UK-CAA) has been supportive of our efforts when it dawned on them that the issues had to do with aircraft.”

He explained that the airline will still continue its Jeddah schedule via Kano explaining that the new biometric requirements by the Saudi Authorities may cause hitches and dwindling traffic but that it will be resolved.

“We will continue to maintain our Jeddah schedule every Thursday via Kano until the issue of biometric , which is now a requirement, is resolved.”

Nigerianflightdeck is an online news and magazine platform reporting business stories with a bias for aviation and travel. It is borne out of the intention to inform, educate as well as alter perceptions with balanced reportage.
Previous Air Peace launches Kano, Yola flights Feb 12, 15
Next Turkish Airlines announces 2018 Targets