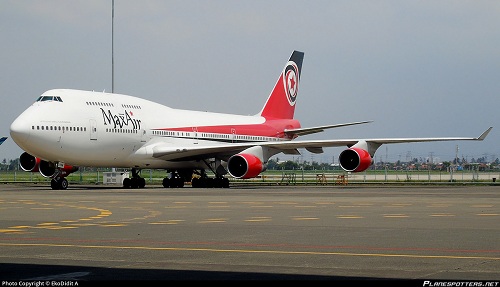 ONE of the designated carriers for this year’s hajj exercise, Max Air suffered a hard side landing affecting its left engine at the Minna International Airport, Niger State today.

The aircraft a Boeing 747 with registration number, 5N-DBK carrying about 550 inbound pilgrims suddenly developed technical fault as it was about landing, no life was lost as all passengers were successfully disembarked.

According to reports, the pilot had struggled to stabilize the plane before he managed to make forced landing on Runway 05 of the airport, a development the source said caused damaged one of the plane’s four engines.

Officials from the Accident Investigations Bureau (AIB), Lagos had visited Minna and immediately inspected the partly damaged aircraft after which they went into a closed door meeting.

Public Relations Officer of the Niger State Pilgrims Welfare Board, Hajia Hassana Isah when contacted confirmed the accident saying, “It was a technical fault, though we are yet to be adequately briefed by the experts on what happened but the place landed successfully”.

Hajia Hassana Isah however said the development would not affect the return journey of the over 2, 000 pilgrims still waiting to be airlifted back home from Saudi Arabia as she assured that all the pilgrims would be successfully brought back.

Further details will be released as Nigerianflightdeck gets updated

Nigerianflightdeck is an online news and magazine platform reporting business stories with a bias for aviation and travel. It is borne out of the intention to inform, educate as well as alter perceptions with balanced reportage.
Previous Activities that livened up this week in pictures
Next FG accedes Ebonyi State request for construction of new airport