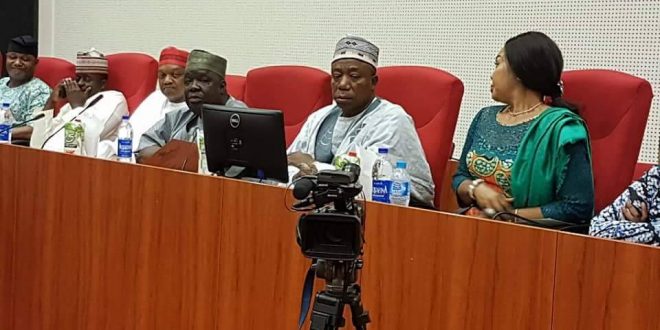 AGITATIONS against Federal Government’s planned concession reached a new level as aviation unions yesterday met with a joint session of parliamentarians from the Senate and the House of Representatives in a bid to change government decision on the concession of the four major terminal.

The unions in the reaction to this, held a congress where they declared that the process was a sham and that the Minister had hoodwinked the FEC without letting them see the full picture.

Against this backdrop the unions gave government an ultimatum after which there would be a wide-reaching industrial action.

However yesterday, the unions took their case to the joint session of parliament drawn from the Senate and House of Representatives committee on Aviation aimed at taking a unilateral position over the proposed concession of four International airports.

The meeting held in a fruitful brain-storming session under a very friendly and serene atmosphere brought out various scenarios which the unions felt were ignored when the Ministry stamped its feet on the concession.

A union spokesman in a statement to Nigerianflightdeck.com said,”We deliberated on an array of though-provoking issues, ranging from compromising the nation’s security, as airports remain borders to our country, the place of workers (both active and pensioners), the exact part of the airport to be concessioned.”

He continued, ” we will also look at the process that led to the emergence of the Technical Advisers, history of failed concessions (using MMA2-Sanderton puzzle, CCECC, the new ultramodern multi-level car park that has bagged 30years in concession already, the DISCOS and GENCOS that were concessioned and yet looking for bailout from government as case studies.”

In their words, “We will investigate the process that led to the emergence of the Technical Advisers, we will not subscribe to any process whatsoever that will jeopardise the security of our country, we will ensure Nigerians are not short-changed. Bi-Courtney concessioning shall be revisited, we assure you of justice in the end.”

Nigerianflightdeck is an online news and magazine platform reporting business stories with a bias for aviation and travel. It is borne out of the intention to inform, educate as well as alter perceptions with balanced reportage.
Previous Trade partners satisfied with Med-view Airline’s strategic growth, urge sustenance
Next Abuja Jabamah unveils mega Fam Trip to 4 Nigerian cities in 7 days